Last year at this time, we reflected on our educational calendar and discussed the various programs conducted throughout 2014 along with the lessons learned from those classes. Continuing that theme, we thought year-end would be a good time look back on 2015, consider the educational events we have hosted both in our office as well as on the road, and what we can take away from them. In all, we conducted a total of 30 different programs for different industry groups including swine, beef and dairy cattle, crop, ethanol, commodity buyers including poultry integrators, egg layer operations and importers, as well as agricultural lenders. Some of those in attendance were clients while others were allied industry participants or producers and end users perhaps new to margin management and approaching price risk from a margin perspective. As forecast at this time last year, 2015 was a challenging year for many of these industry groups with margins either deeply negative or at the very least severely depressed from the levels enjoyed last year.

Consequently, while a passive approach to managing risk worked well for many producers in 2014, this year was a different story where proactive margin management helped separate those operations that had a good year from those who clearly struggled given the current landscape. A key lesson learned that resonated as a common thread through these different groups and industries is that taking advantage of opportunities to make adjustments on positions proved to be a major contributor of improved margins. In our July issue, we explored an example of this by looking at the corn market earlier this past summer. Some will recall that there was a brief weather scare due to excessively wet conditions in parts of the Midwest that caused new-crop corn futures to spike about 25% in value between mid-June and mid-July. Following this sharp price increase the market then retreated back to where it has previously traded (see following graph). 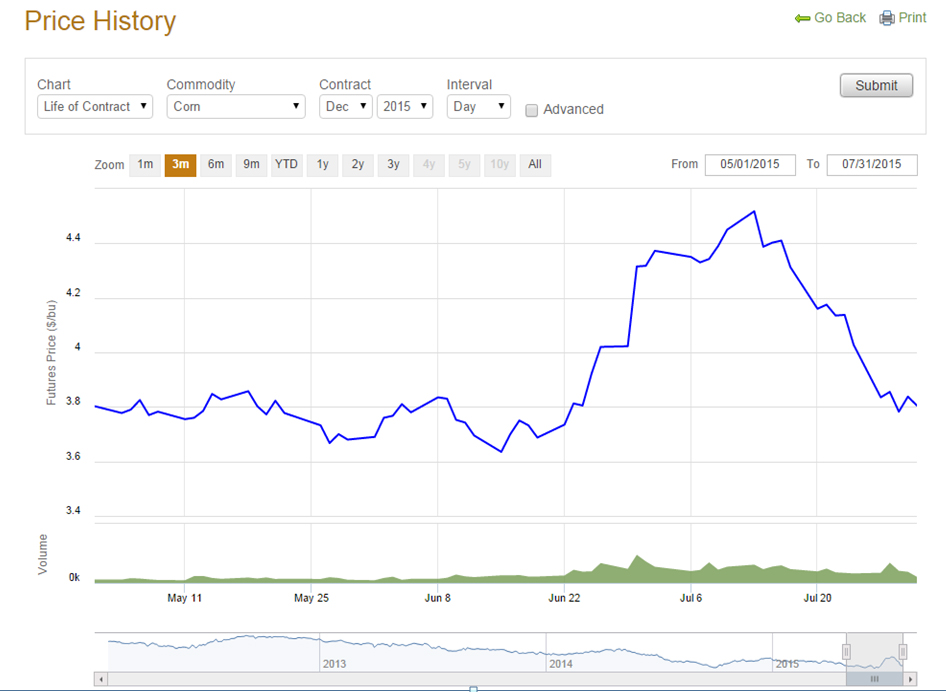 While some may have found this volatility unnerving, it allowed for very beneficial adjustments to be made on both sides of the market – for those with either long or short positions managing different price risks to improve upon those positions. For the corn producer referenced in that article, they were able to improve their sale price by a net of $0.25/bushel as a result of making adjustments through that period. The hog producer realized an even better improvement of $0.44/bushel to their purchase price, which effectively added $2.33/cwt. to their net margin for Q4. Now let’s consider this same model hog operation looking forward to adjustment opportunities on upcoming marketing periods. Q2 of 2016 has just witnessed a noticeable improvement in projected margins based on a combination of lower feed costs and in particular, a significant recovery in hog prices from earlier in the fall. Data from the latest USDA Quarterly Hogs & Pigs report revealed lower than expected farrowing intentions this winter which suggests tighter hog supplies next summer. As a result, the June Lean Hog futures contract has recovered about $7.00/cwt. from price levels in mid-November.

Let’s assume this particular producer had a short futures position from earlier in the fall, selling the June Lean Hog contract at $80.00/cwt. Following the drop in price from early October to mid-November, they decided to convert the futures position to an options strategy in order to increase flexibility should the market eventually recover (as it now has). In early November with the market trading around $72.00/cwt., the hog producer exits their short futures position, buying the contract back at $72.80/cwt. To address the risk of a further decline in price however, they decide to replace this position with a put spread, buying the $72 put and paying a premium of $4.30 while selling the $62 put and receiving a premium of $1.30. Therefore, the producer is protected over a $10 range of lower prices for a net cost of $3.00/cwt. while at the same time open to participate in all higher prices above the market. To summarize the adjustment, they exit the short futures position with a gain of $7.20 (sold at $80.00 and bought back at $72.80) and then spend $3.00 of this gain to replace the position with a $10 put spread with protection beginning at $72 and ending at $62. In total, they net a gain of $4.20/cwt. and maintain a limited range of protection to lower prices.

Currently, the market is trading at $78.00/cwt. after recovering from the lows in mid-November. To capitalize on this gain, the hog producer could exit the put spread and sell futures at the higher price level the market is now trading at. Let’s explore how this would help them improve upon their previous sale price. The put spread could be sold for $1.50/cwt., so the producer would lose half the value they paid for this position in mid-November, although the market is now $5.20/cwt. higher than where they exited their previous short futures position at $72.80/cwt. They had a net gain of $4.20 from the previous adjustment, and they now can add $1.50 of salvaged value from their put spread to that gain for a total of $5.70/cwt. By selling the June futures contract at $78.00 and adding this gain of $5.70 to that price, their net sale price is now $83.70/cwt., $3.70 higher than where they started from back in October (see following graph). 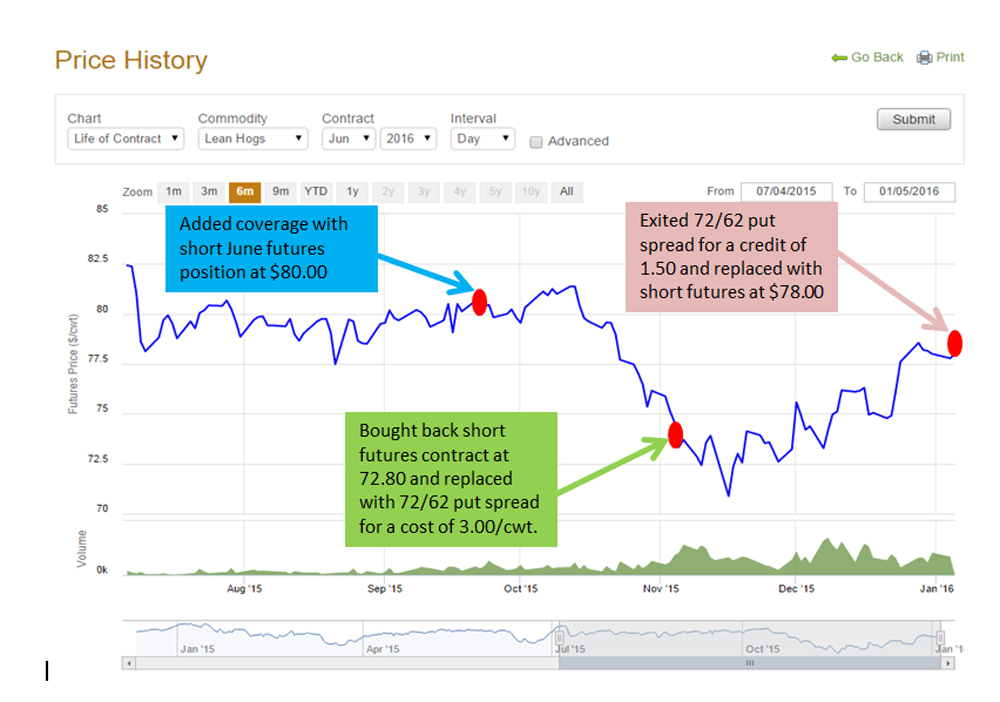 Another point to make with these adjustments is to think about how quickly they can improve upon a margin. For the hog producer, they may have been monitoring Q2 2016 margins up to a year or more in advance. With a margin management policy in place they may have begun to initiate coverage at the 70th percentile in order to protect forward opportunities. Figure 3 shows the margin history for upcoming Q2 2016. You will notice that margins hit the 70th percentile just prior to the aforementioned corn adjustment, when prices spiked in response to the excessive rain last summer. Assuming the hog producer made the corn adjustment (or something similar to the example previously described) followed by the eventual hog adjustment (or something similar), they may have realized a net margin for that initial coverage well above the 70th percentile opportunity originally projected. The two adjustments presented in this article would have added just over $8.00/cwt. to the hog producer’s Q2 margin which represents a substantial improvement to the open market value currently at about $10.00/cwt. (see following graph) 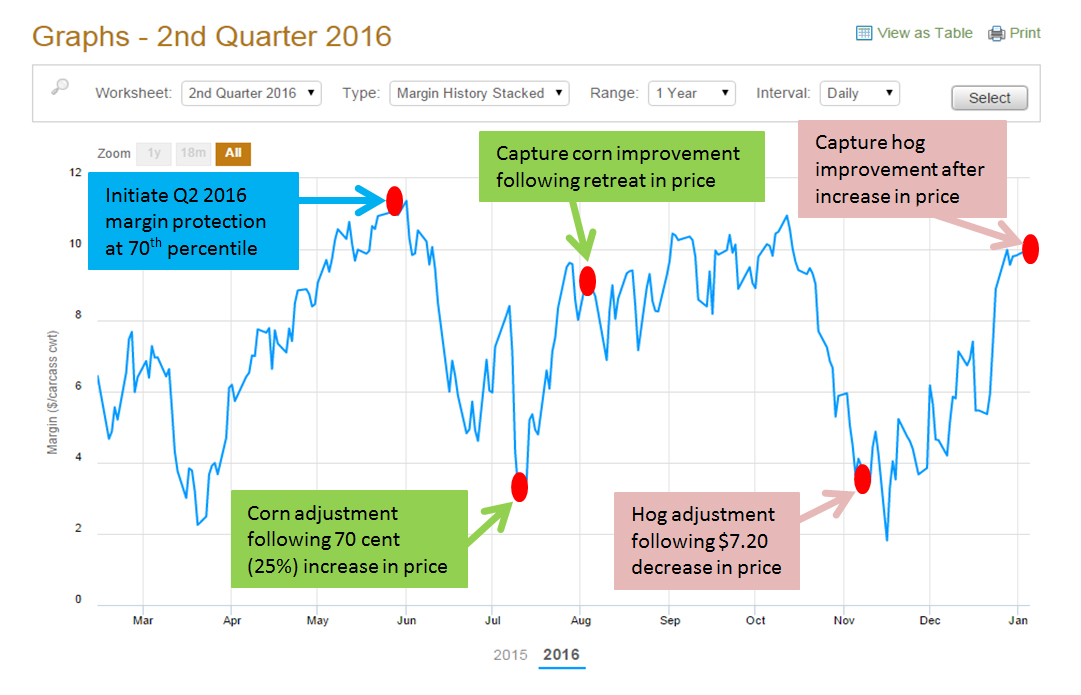 Moreover, with margin improvement on an initial position, the hog producer may have felt more confident adding coverage as new opportunities presented themselves. You will notice that Q2 margins came back to the 70th percentile by late October. Having already improved upon the initial position following the corn adjustment, the hog producer may have felt comfortable adding another layer of coverage at that point even though their margin management policy may stipulate a higher percentile before increasing coverage. If for example their net margin for the initial position was effectively at the 80th percentile following the corn adjustment, they might elect to initiate a new strategy to protect forward margins at the open market level of the 70th percentile. The eventual hog adjustment previously reviewed then may have improved both positions where the operation might feel comfortable now adding a third layer of coverage to their Q2 margin protection plan.

The main point is that similar to the recent history in 2015, in most years actively managing forward margin strategies is a big part of the margin management process. We invite you to learn more by exploring our 2016 education calendar and attending one of our classes in the upcoming year. The more you know about proactively managing forward margin opportunities, the better equipped you will be to assure the long-term profitability of your operation.