Whether your margin management is guided by a formal policy document or a loose set of rules, chances are that it essentially boils down to answering one question, “how much should I hedge?” By prompting you to evaluate many factors – including current and historical margin levels, your operation’s debt and liquidity, and your market bias – that question can help indicate what kind and how much coverage is appropriate for your operation. But it may not cover every factor that affects your exposure. That’s why you should also ask a second question, “how much am I willing to risk?”

What’s the difference?
Since risk and opportunity are just opposite sides of the same equation, in theory, you could simply subtract the amount you will hedge from 100% to get the amount you will leave open. But asking both questions together prompts you to take a more complete view of your risk, increasing your chances of establishing a level of exposure that truly matches the level you are willing to accept.

The goal of any margin management plan is to establish a systematic framework for managing your overall risk. In an era of strong margins, it may make sense to focus mostly on the up side, since the chance of a catastrophic loss is negligible. But when margins remain unusually depressed or negative for prolonged periods — as they have recently in the crop, hog and cattle industries — it becomes increasingly important to ensure you’ve protected against the worst-cast scenario.

How bad could it get?
For hog producers, it may feel as if margins can’t go any lower, but history tells us differently. Year-to-date margins in 2016 have been closely following those of 1998. In that year, a steady decline, starting in mid-summer, was followed by a small uptick. Then a decrease in processor demand triggered a quick and dramatic drop in early November. Hogs lost about 80% of their value on the cash market, as prices fell from nearly $40/cwt., to just $8. The December CME spot futures, which had been in the same range as cash, dropped by half. Today, growing uncertainty over shackle space for this winter has raised the likelihood that a decline in packer demand could drag prices below their already-depressed levels. If your margin policy calls for hedging 60% of your hogs at today’s margin levels, that means it also calls for leaving the remaining 40% fully exposed to the risk of a further decline. 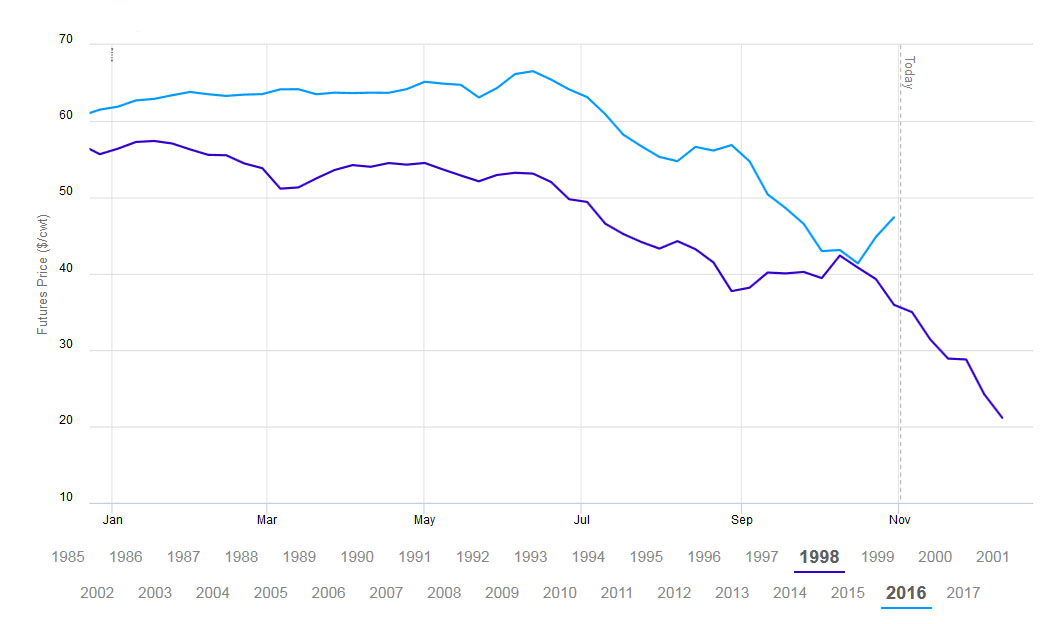 Margins for the 2016 year to date have tracked very closely with those in 1998.

Likewise, beef prices have fallen since earlier this summer, and cattle feeders may want to retain opportunities to participate in a rebound by leaving some of their fats unprotected. They will need to make a difficult decision about how much of this production to lock in at a loss and, by consequence, how much to leave exposed to the risk that the steady downward trend in the cattle market will continue.

With crop prices that are below the cost of production, growers may be holding onto their bushels while waiting for the price to rise. They now need to determine how far they will allow prices to drop before they give up hope for gains on any still-unpriced production.

While dairy margins are currently above zero, deeply negative margins earlier in the year put a strain on cash flow for many producers. As a result, they are even more driven to participate in any and all price gains in the milk market, perhaps losing sight of the possibility that prices could dip back down to where they were earlier in the year. That would further strain a dairy operation’s cash flow, complicating their financial planning and possibly forcing them to contract their operations.

So how much should I hedge/risk?
Periods of unusually strong margins support the notion that the optimal level of coverage is always less than 100%. At the same time, periods of historically depressed margins remind us to protect 100% of risk from catastrophic losses. The ideal, of course, is for a margin management policy to address the possibility of both extremes, as well as the middle ground.

One way to do this is by taking positions to establish coverage for the amount of your production that you would normally hedge at a given margin level, and additional positions that represent “catastrophic insurance” coverage on the remainder. For example, a dairy margin policy may call for hedging 25% of milk volume when forward margins are at about the 70th percentile of 10-year averages, as they are today. To establish that level of protection, the dairy risk manager could purchase puts against 25% of production at a strike price that is close to the current market level. By simultaneously selling call options on that same 25%, the producer lowers the cost of the puts by the amount of the premium received for the calls. That offset allows them to purchase puts at a higher strike price – and thereby establish stronger protection – than he might otherwise feel comfortable doing.

For the remaining 75% of production that remains unhedged, the dairy can establish a floor by
purchasing put options at a strike price that is lower than the current market. Because the puts are out-of-the-money, these options would be relatively inexpensive. In this way, the dairy is protected across 100% of production against the risk that margins could revert to historically depressed levels – and at a relatively low cost.

This combination of strategies results in a net position with a minimum margin on 100% of production and a maximum margin on only 25% of the same production. And without any sales obligation on 75% of production, the dairy is able to participate in any improvements in margins.

How can I afford it?
For some producers, their restricted cash flow means any capital outlay for options feels out of reach. In that situation, one solution is to use a swap account. Swap accounts allow you to execute a hedging strategy without paying any up-front premiums or day-to-day margin calls. Settlement occurs when you close out the position. A dairy producer could, for example, choose a settlement date that corresponds to the receipt of their milk check.

Option strategies are complex and the positions that are right for your operation will depend on a number of factors. But regardless of the hedging strategy you choose, asking the right questions about your risk is the right first step. If you have questions or would like more information about hedging strategies, please call us at 1.866.299.9333.