With hog margins currently at some of the most depressed levels in years, many producers are understandably concerned with the price they are receiving for their pigs. While much of the present situation is beyond the producer’s control, such as tariffs and trade issues, there are other areas where they can exert more influence. Controlling costs is certainly one of those, and many operations have already made adjustments to become more efficient. Another area that may be one to look at is how they are paid by the packer for their pigs. Most producers deliver hogs off formula contracts, where the pricing mechanism is determined in advance and remains consistent over the life of the contract. These may include some differential from the CME Lean Hog Index for example, or be a function of some cash price as reported by USDA such as a percentage of cutout or differential from Western Corn Belt.

Many producers reading this may already be considering a new packer contract or in the process of renegotiating their current packer agreement. With the new plants that have recently opened, some producers have been approached by packers looking for pigs to fill their schedules and offered contracts with pricing features that differ from those they are currently using. You may be curious about how these contracts would have compared historically with how you are presently being paid for your pigs. Also, to the extent that a new packer or your existing packer may be presenting new offerings to choose from, you may wonder whether you would be better off with one alternative over another.

Fortunately, there is a way you can make these comparisons and analyze various contract alternatives to help inform decisions about how to negotiate with a new packer or renegotiate with your existing packer. As an example, you might compare two different offerings to see how they would have stacked up against each other in past years. In addition to providing a historical price comparison, this would also allow you to measure basis variance between the two in order to help gauge whether one contract may have been more favorable than another. We can look at a specific example comparing the difference between 90% of cutout for instance against the Western Corn Belt plus $5.00 to see how these two payment formulas would have differed historically over the past five years.

Figure 1 shows the comparison of these two price series over the past year. You will notice that the contract based off 90% of cutout is currently higher than the WCB plus $5.00 contract by $2.20/cwt. ($66.65 versus $64.45). As a result, it would be more favorable to deliver pigs in the spot market against the contract priced off of the cutout rather than the WCB contract. You may also notice though in the comparison of the two price series that up until quite recently, it was actually much more favorable to be priced off of the WCB contract compared to the cutout formula, in some cases by almost $13/cwt.

There were other times however, such as earlier this spring and particularly last fall, when it was significantly better to have been priced off the cutout contract relative to the WCB formula. In addition, you can see that there has been more variance in the past year with the WCB contract price series than the cutout contract series. While both were priced very closely together at around $88 last summer, the lows in the WCB plus $5.00 series show much deeper troughs while conversely, the recent high has also been much more of a premium as compared to the 90% of cutout series. 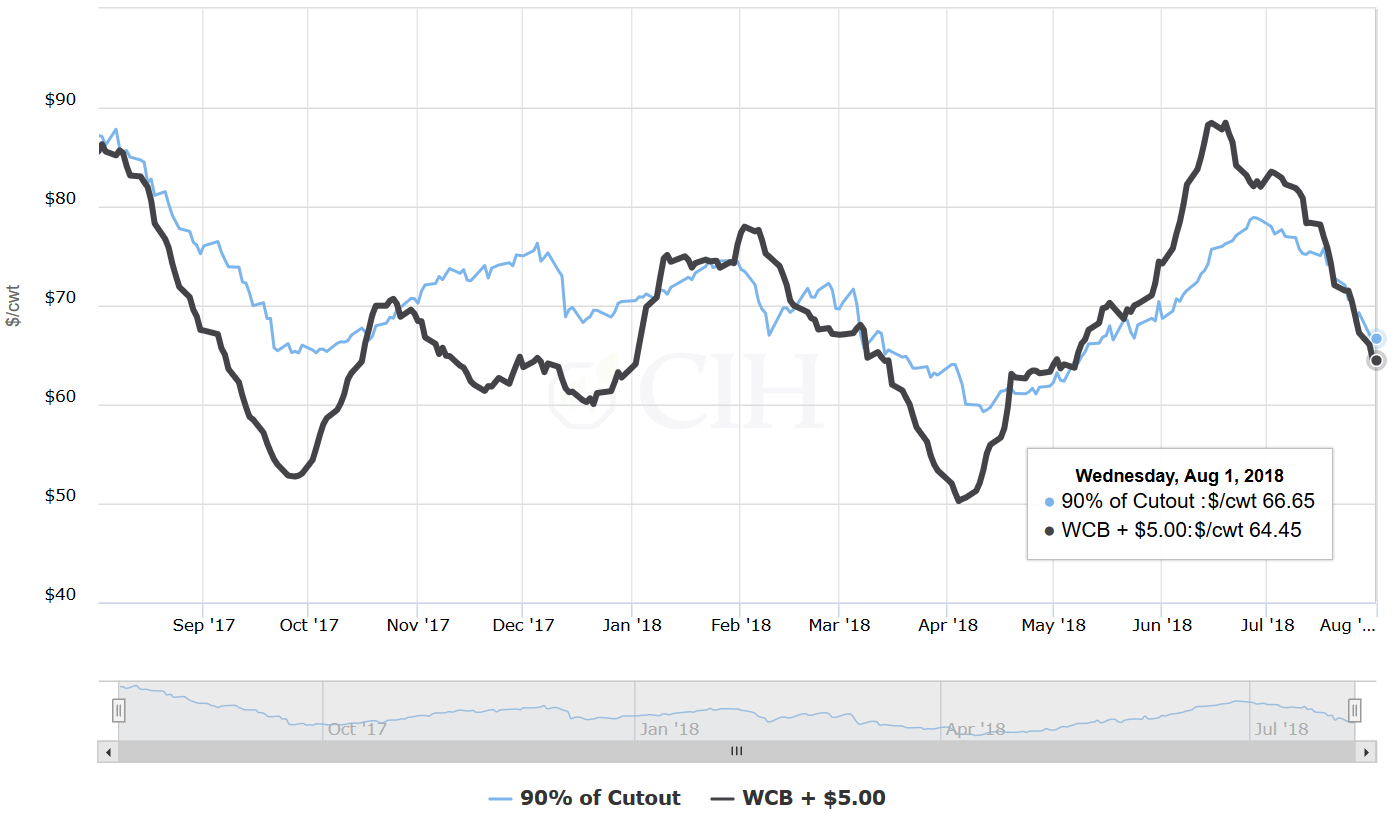 We can also look at the historical variance of the two price series by comparing both price and basis in the following table of Figure 2. This comparison measures current values against averages over the past 1, 3 and 5 years of history. Here again, we can see that being priced off 90% of cutout is currently more favorable than having a contract based on WCB + $5.00, with both the 1 and 3 year averages showing the cutout contract to likewise be superior. However, a longer term view taking a 5-year average shows the price of WCB +$5.00 to be slightly higher by about $0.60/cwt.

These comparisons can also be shown visually in graphs with some interesting observations. Note that the previous chart comparing the past year of price performance indicated more variance in the WCB price series versus that of the cutout series. While this has been true over the past year, the basis history reveals something different. Figures 3 and 4 show the five-year basis ranges for both the WCB + $5.00 versus 90% of cutout, respectively. In both cases, the CME May Lean Hog futures contract has been excluded from the basis calculations. You will notice that the range of basis for the WCB + $5.00 price series has been $29.51/cwt. over the past five years, with a maximum value of $13.22/cwt. positive to $16.29/cwt. negative. Conversely, the range of basis for the 90% of cutout series has been wider at $44.52/cwt. during the same time interval, with a maximum value of $24.41/cwt. positive to $20.11/cwt. negative. It may be misleading therefore to conclude that you would be assuming more risk with the contract based off the WCB + $5.00, despite the relative price performance of each during the past year.

Another useful feature of being able to compare contracts side by side is to help with anticipating kill checks upon delivery. In addition, a producer may have more than one type of contract with the same or different packers. To the extent that the producer has some flexibility with their delivery schedule, they may find it advantageous to channel their deliveries to maximize the value of their hogs in the spot market. As an example, a producer with existing contracts priced off the comparison in this example would have an incentive to market as many hogs as possible right now against the cutout contract before delivering against the WCB contract. This could add incremental value to their marketings by maximizing the basis differential between the two pricing mechanisms.

It should be noted that the comparisons used in this example are presented for illustration purposes only, and are not meant to replicate any specific packer contract offerings. These examples are also not being presented to endorse one type of pricing mechanism over another. You should understand the exact features of any packer offering before making specific comparisons between contracts in order to draw your own conclusions on which type of contract may be a good fit for your particular operation.

For more information on how these studies were created or for help understanding how to navigate packer contracts, please feel free to contact us directly. While much of the current hog margin landscape is beyond control, there are things that producers have more sway over. The ability to better understand and negotiate packer contract offerings is definitely something a producer can leverage to help increase revenue and mitigate losses in the present environment, and there are tools to help them in this process.