Typically at this time of year as the season switches to spring or summer, we explore the topic of seasonality as it relates to margin management. In our first installment two years ago, we discussed how agricultural commodities display seasonal price tendencies around production cycles. Last year, we reviewed the seasonality of option implied volatility and how that factors into the decision making process when choosing flexible margin management strategies to protect revenue or input costs. In this issue, we revisit the topic of seasonality as it relates to putting together and executing a thoughtful margin management plan. Among other factors that an operation should factor into a sound plan are profitability levels, with the goal of targeting a favorable return on equity. For instance. an operation may consider setting targets based on historical percentiles of profitability for the particular entity, with the goal of achieving an above-average return for a given production period. While profitability levels are a starting point, they are not the only factors that should be considered.

In a given year, profitability targets may not be reached such that protection would never be established to secure the operation against margin risk exposure. This is where seasonal considerations with respect to margins may help refine a plan. For example, are there certain times of year when a particular operation is exposed to greater risk of deteriorating profit margins? How might the operation wish to incorporate this knowledge as part of their margin management policy or plan? As an example, many hog operations have expressed concern about the future outlook of the market given expectations for increased hog slaughter and pork production later this year combined with uncertain demand. While year-to-date federally inspected pork production is currently running about 0.1% below a year ago, and the USDA’s most recent quarterly Hogs and Pigs report indicated reduced farrowing intentions for the March-May and June-August periods relative to 2015, there remains concern that the market will be potentially oversupplied this coming winter. There has also been discussion that shackle space could become an issue given current slaughter capacity ahead of new facilities coming online in 2017.

On the demand side, pork exports for the year to date have been strong and many have pointed to the current disparity between the prices for hogs in the U.S. and China; however, the future is less certain. As grills heat up this summer, cheaper beef and chicken will present competition in the domestic market. Meanwhile, the Federal Reserve appears committed to gradual tightening of the money supply, with further rate increases as early as June, which could strengthen the U.S. dollar. The hog market remains very sensitive to – and dependent on – pork exports, which accounts for over 20% of total production. Renewed dollar strength, in combination with slower global growth, would certainly not be a welcome development. All that uncertainty means hog producers remain exposed to high levels of risk. From a margin perspective, there has not yet been a favorable opportunity to secure attractive margins in Q4. Projected returns for a model finishing operation have remained both below breakeven and below average when compared to the previous 10 years (see Figure 1.) 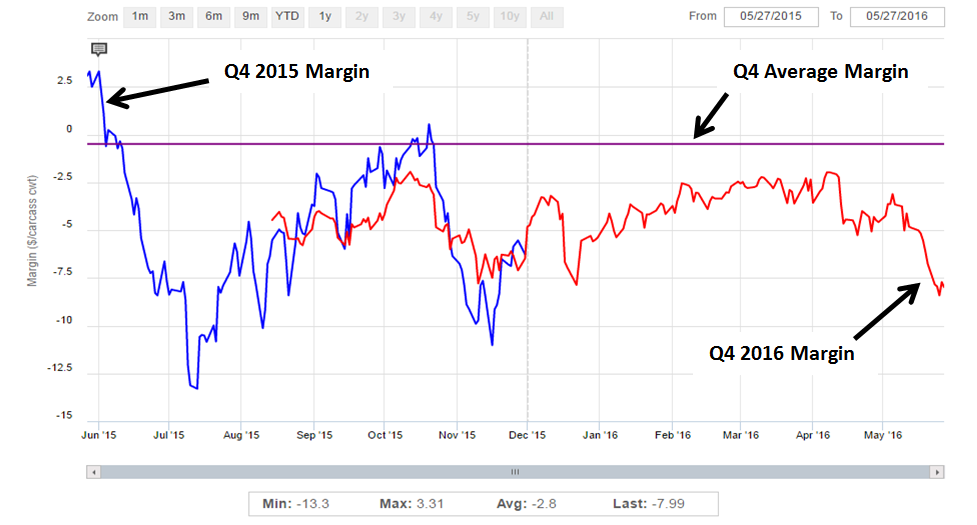 From a profitability standpoint, margins have not yet reached a level that offers a financial incentive to protect Q4 risk through contracting or exchange positions. While profitability targets would not have triggered Q4 margin protection, seasonal factors may very well have justified it. In other words, when managing risk from a margin perspective, certain times of the year might prove more favorable for contracting compared to others – regardless of where forward margins are being projected.

Figure 2 illustrates the seasonality of Q4 margins over the past 10 years. The early spring period from March to mid-April tends to correspond with a seasonal high for Q4 margins ahead of a gradual deterioration into the summer. A producer might conclude that it makes sense to establish protection for Q4 in this timeframe, regardless of the actual level of projected margins. 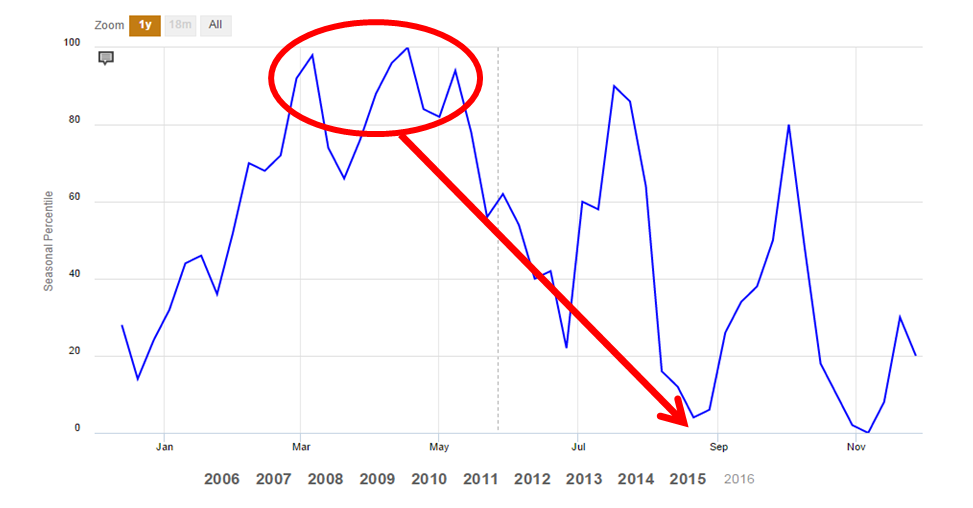 For Q4 2016, while projected margins back in the spring would not have triggered a producer to establish protection based on profitability projections or historical percentiles, our clients nonetheless did choose to protect margins in this timeframe as their comprehensive margin management plans incorporate seasonality in the decision making process. As it turns out, Q4 margins have deteriorated since then due entirely to rising feed costs as Q4 hog prices have held relatively steady since early March. In fact, these factors have caused greater attention to be focused on risk to hog prices. Less attention has been paid (until quite recently) to the cost of feed in the margin equation. Very few people were able to foresee the 50% rally in soybean meal prices that has unfolded since early April. Corn prices likewise are about 50 cents above their lows to go along with the $100/ton plus increase in meal prices. The fact of the matter is that no one knows where the market is going or what factors may contribute to margin deterioration; however, a good comprehensive plan incorporates all aspects of a producer’s risk including input costs.

How about a dairy operation? Here too there has been quite a bit of concern expressed about the future outlook of the market. Milk prices remain depressed at multi-year low prices that were last seen in 2009-10 during a period of horrendous negative margins for the industry. A strong increase in milk production both in the U.S. and especially the EU has weighed on global dairy product prices as demand has not kept up with the supply increase, allowing stocks to swell. At the same time, margins have deteriorated in response to rising feed costs, with both corn and especially soybean meal advancing sharply over the past month as previously highlighted. Unlike a hog operation, dairies have had opportunities from a profitability standpoint to establish coverage in Q4 with margins previously existing at historically high percentiles going back to last fall (see Figure 3). 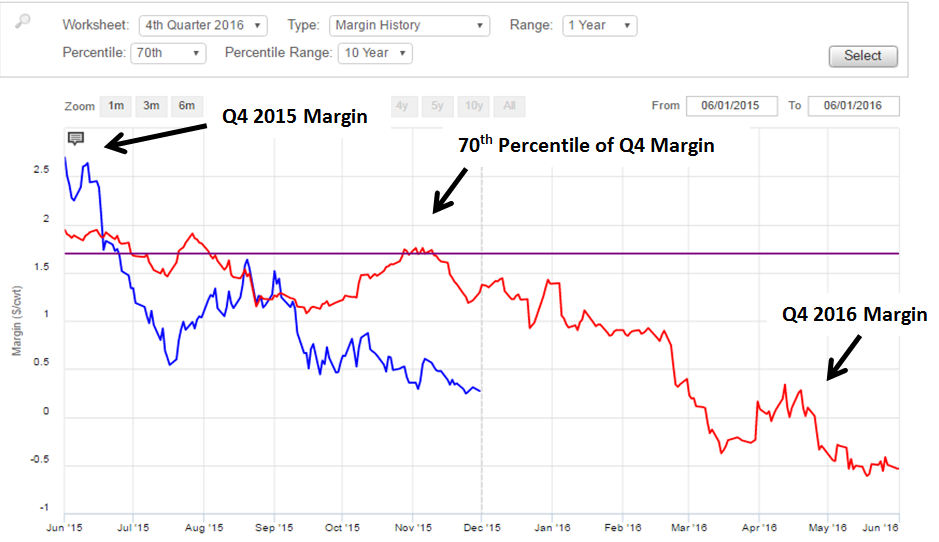 Despite this, many dairies may realize that perhaps they do not have as much forward margin protection in place as they would like given the current outlook. What does seasonality say about Q4 dairy margins?

Figure 4 displays a seasonal graph of margins for this production period, highlighting that margins tend to deteriorate from mid-June into mid-July. As a result, a dairy operation with margin risk exposure may choose to initiate protection strategies now to mitigate any further losses from either higher feed costs and/or lower milk prices that may come later. 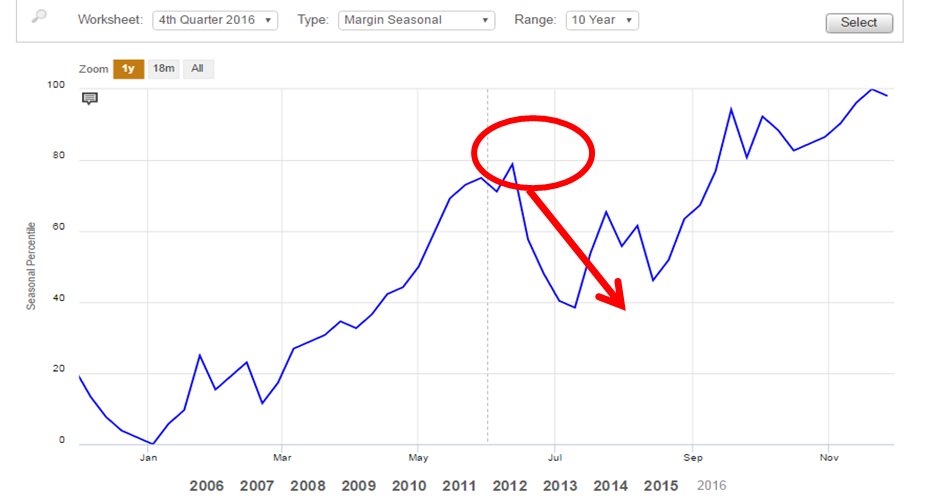 Just like the price of a commodity or the implied volatility of options, margins themselves also display seasonal tendencies. A thoughtful margin management plan should take those into consideration along with other factors such as historical percentiles or profitability targets to help refine the decision making process. With any plan, it is important to weigh many different considerations before implementing a strategy. It is also important to stay consistent in your approach. This helps smooth our year-to-year volatility so that you can achieve your goals and objectives over the long-term.