For many margin managers, using derivative contracts to protect forward profitability can be challenging given the performance bond requirements of various futures and options strategies. In addition to the cash flow implications of maintaining these margins in a brokerage account, gains and losses on open and closed positions are typically “marked-to-market” or realized periodically on a month-end basis. It may well be the case that depending on market conditions, open or closed positions will result in a loss that is realized in the current period; however, that loss goes against a deferred period where actual costs and revenues will be assumed at a later date. This dilemma creates a cash flow dislocation as hedge losses are realized first before operating gains follow later. As a result, working capital is necessary to fund the hedge losses until funds come back into the operation over time. In addition, it becomes easier to focus on the “loss” resulting from the derivative transaction because the operating gain has not yet caught up to that loss.

A producer might conclude that they should not have hedged to begin with so that the loss on the derivative contracts would not have occurred. While it may be true that avoiding these losses would have allowed for even more favorable margins to be realized, it is important to keep in mind what these losses represent and put them within context of the operation’s overall goals and objectives. In using futures or options to protect costs and revenues in deferred periods, one is typically defining a level of profitability that represents an acceptable target or return to the operation. A projection of that forward profit margin is made with some assumptions built in, but if the model reasonably captures all the unique variables of the specific operation, it should provide good visibility into those forward margins.

Let’s assume for example that we have a hog operation which finishes around 90,000 market pigs annually and has actively been monitoring and hedging forward margins about a year out in time. They have begun to realize actual margins in the spot Q4 period, and maintain derivative positions to protect forward margins through Q4 of 2015. Given this hypothetical operation’s goals and objectives, they have defined a target net return over the next year of $2 million they would like to protect with the possibility of that margin improving slightly if margins continue to strengthen. Following the price action of forward feed costs represented by corn and soybean meal futures along with projected revenues represented by hog futures, the market has already provided the opportunity to contract a mix of futures and option combinations that will allow this operation to achieve their objectives, and they have been maintaining these positions in the market as forward margins have continued to improve.

With corn and soybean meal prices steadily moving lower over the past several months along with increasing hog prices, this operation has both open and closed hedge losses on these futures and options combinations that they are marking to market on a monthly basis. While their costs and revenues have yet to be realized for the remainder of 2014 and all of 2015, feed costs are generally lower than what they were projecting when they started to protect these forward margins and hog prices are higher than what they were expecting to receive in these deferred periods. On the open market, their unhedged margin is much more favorable than what they are projecting although their net margin is nonetheless above what they targeted as a net return over the following year. The graphic below illustrates a tool we call the Capital Monitor which shows the impact of these derivative hedges on net profitability relative to the open market: 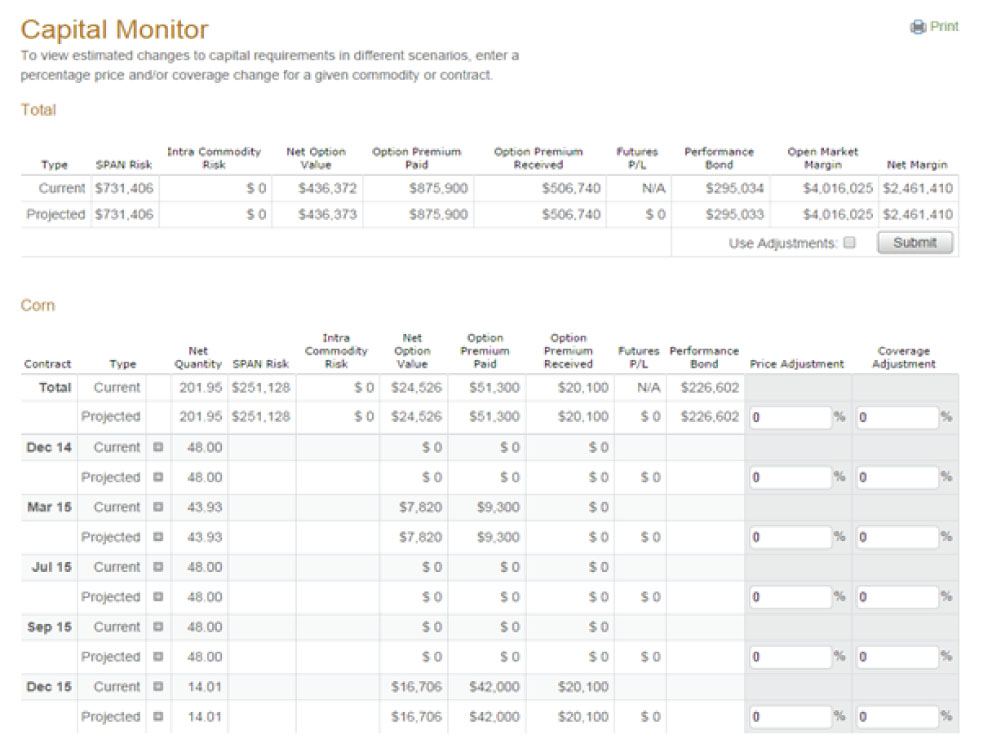 Looking at the total across the top and scanning over to the far right, one can see that on the open market, this particular operation would be making just over $4 million based on an unhedged position with all costs and revenues reflected at current projections. In the final column, the net margin of $2,461,410 shows what the operation is expecting to realize taking into consideration the impact of their hedging positions over the following year. While the net margin is not as strong as what would be the case under the open market, it is nonetheless above the goal this particular operation set out to achieve. The difference between the two figures of $1,554,615 would represent the hedge loss on both open and closed positions looking out through Q4 of 2015. While this figure does represent a cost to the operation both from the standpoint of interest on working capital until actual margins are realized as well as lost opportunity, it is important to keep in mind that the operation is still projected to achieve their objective in realizing a margin above their defined profitability target.

In judging the impact of hedge losses on open and closed positions that are marked to market but allocated against deferred periods, it is important to look at the bigger picture of what these losses represent within the broader context of net profitability. If one only considers the loss without taking into consideration improvement in operating margins that result from lower costs and higher revenues, they may miss the point of how their operation has actually achieved a favorable result in the end run.