Much has already been written about African Swine Fever (ASF), including its current and potential impact on the market. As the disease continues to spread in China with new cases now being reported in the southern provinces of Yunnan and Guizhou, it has moved to major consuming regions and disrupted local cash hog markets. It also is now on the border with Vietnam, another major hog producing country in Asia with a large pig population.

While many market watchers are excited about the prospects of China potentially needing to import large supplies of pork ahead of their Lunar New Year holiday, there are headwinds for U.S. suppliers if this does come to fruition. The trade war has caused China to levy a 62% duty on U.S. pork imports, and while the U.S. may still be competitive despite the tariff, we will be a supplier of last resort for political reasons as China exhausts product first from the EU and Canada.

Even if the U.S. is able to capitalize on increased market share to other destinations displaced by a surge in Chinese demand, it will only be able to do so if it remains free of ASF. While we don’t necessarily have to worry about a transmission from wild boars as they do in Germany or Spain, the disease could arrive here through infected meat or casings. A story last week highlighted the U.S. Beagle Brigade, and in particular, Hardy – a USDA-trained detection dog who sniffed out a roasted pig head in traveler baggage at Atlanta’s Hartsfield-Jackson International airport.

While that passenger and their baggage arrived from Ecuador, many more travelers come from China every month. According to the National Travel and Tourism Office (NTTO), over 3 million passengers arrived to the U.S. from China in each of the past two years based on I-94 data, with nearly 1 million passengers so far in 2018 through April. It is not a stretch to think that confiscated sausage or other pork products could potentially be carrying this disease here given that it has already been detected in Hokkaido, Japan as well as in South Korea from Chinese passengers traveling to those countries.

Given the heightened uncertainty in the marketplace, many hog producers are concerned about how to approach their risk management decisions. A recent article by Kent Bang from Compeer Financial highlighted this concern by noting that he has never experienced a time when it was more difficult to determine the outlook despite his many decades in the industry. He also pointed out that in the midst of a tough environment, the opportunity exists to lay off some risk.

One of the positive aspects of the current market environment (for now) is the fact that feed costs are under control with large harvests of both corn and soybeans. Moreover, the trade war that is hurting U.S. hog producers through increased tariffs on U.S. pork exports is also keeping feed costs low as similar tariffs on U.S. soybeans have caused a plunge in export sales to China. Looking out to 2019, hog margins in Q2 currently are about $25/head or $12.56/cwt. which is the highest since we began tracking them and very close to the 80th percentile of profitability over the previous 10 years (see Figure 1.) 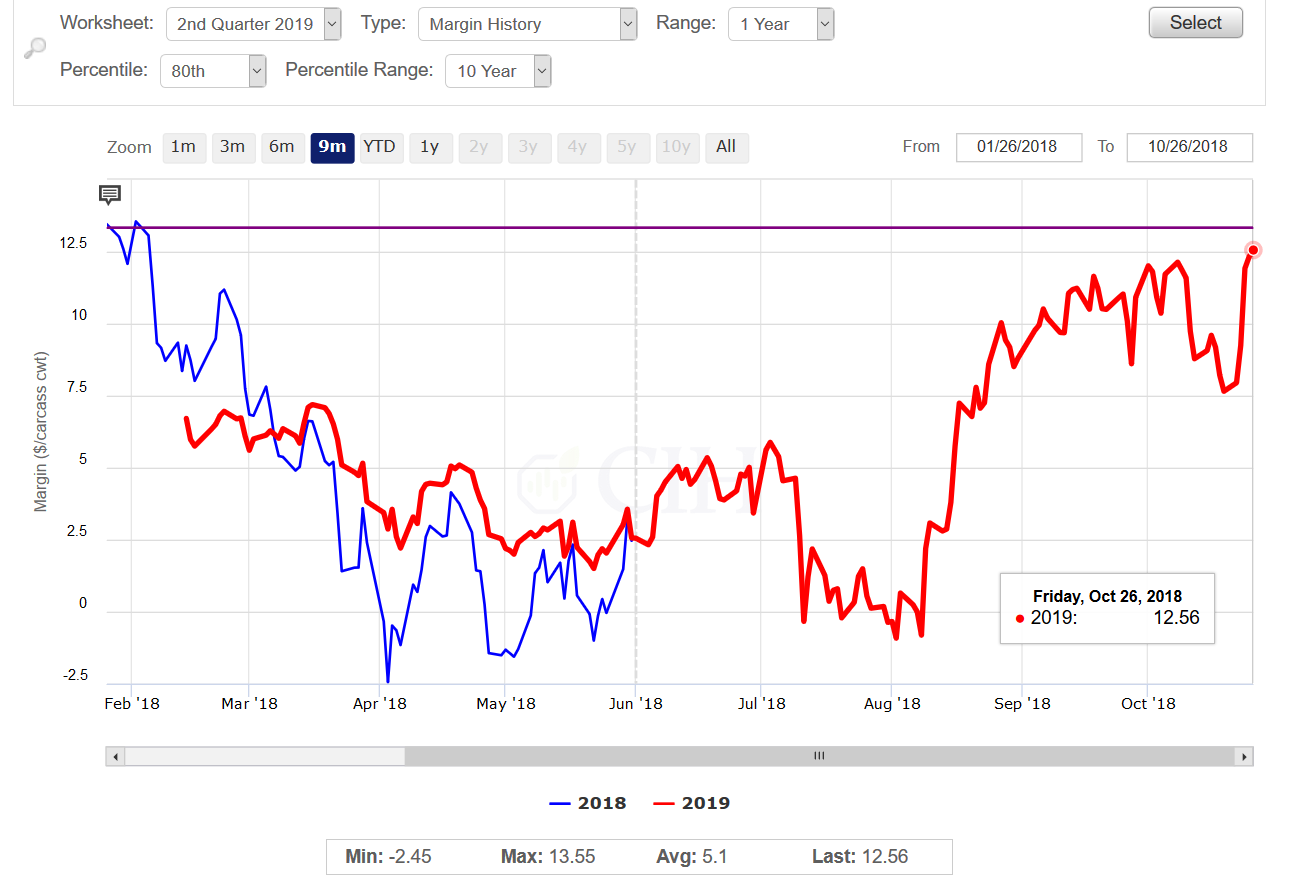 While current margins are attractive from a historical perspective, many producers have fresh memories of 2014 and lost opportunities that year hedging what were historically high hog prices before they rose to over $130/cwt. It has been suggested that a solution for such a scenario this time around would be to purchase a put option. This provides the buyer the right without the obligation of exercising a sale price at current levels to protect a floor value for their hogs under the market. Although definitely a strong strategy consideration, it comes at a significant cost as option prices are very expensive right now given the uncertain nature of the market.

Figure 2 charts the implied volatility for June 2019 hog options which measures the price or premium for uncertainty that traders are collectively assessing for the hog market outlook. This can be thought of as an objective measure of an option’s true cost, or what you are paying for the time value and added flexibility of not being committed to a price while protecting that price level until expiration. Although the implied volatility has dropped recently, it is still trading at a seasonal high for this time of the year and not too far off of all-time highs based on the past 10 years of history. The spike in implied volatility between early August and mid-September corresponds to evolving news on ASF as the disease was initially discovered in China and subsequently spread throughout the country. 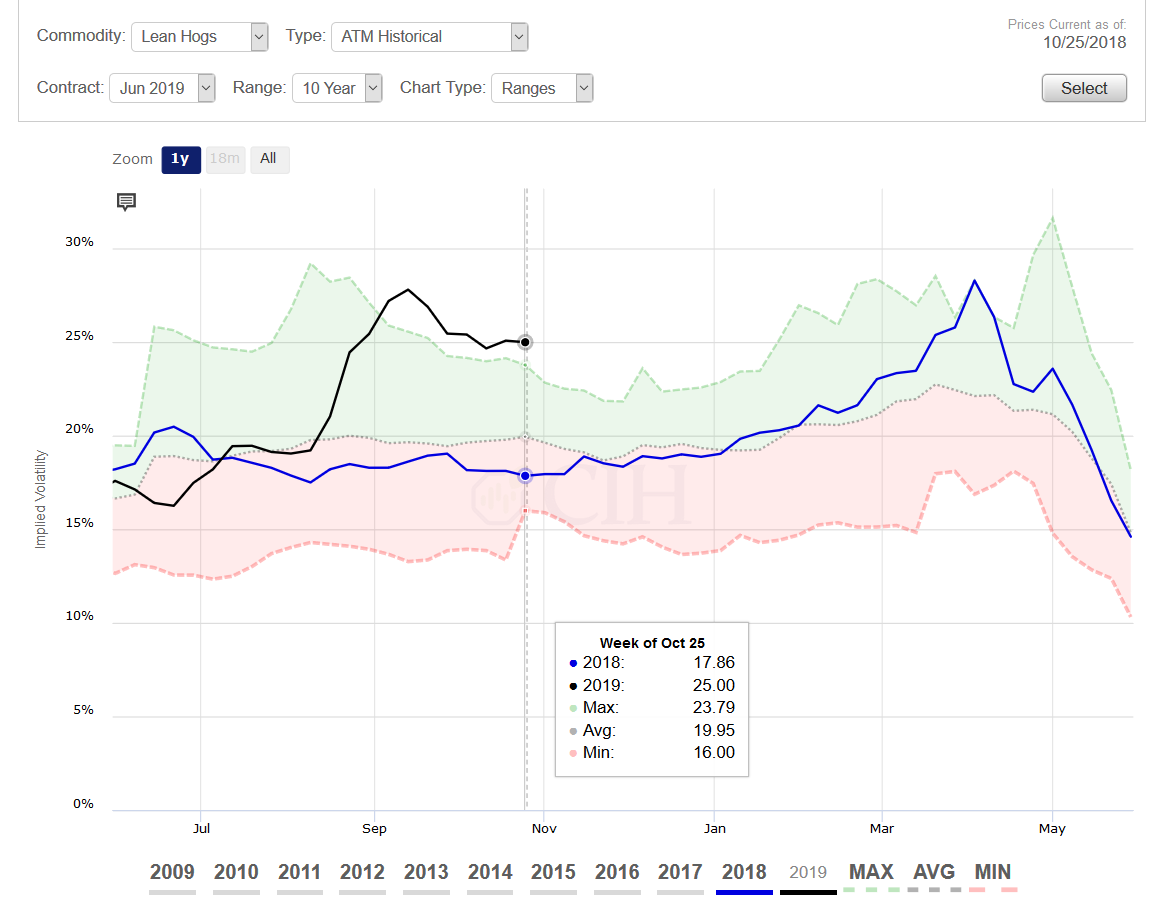 So while buying a put option outright is certainly a viable alternative given the uncertain market outlook, one has to accept the fact that they are now purchasing an inflated asset. It is important to remember however that the option is an asset, and one that will not lose its value immediately even though it must be paid for in full when it is purchased. You are essentially (and literally) buying time to wait for things to develop or the market outlook to become clearer.

As an example, let’s assume that we purchase a put option on June 2019 hogs today with the intention of holding this asset until mid-January. By then, we should know a lot more about the ASF situation in China, including whether or not they will need to purchase large quantities of pork for their Lunar New Year Festival in early February. We can model what the option will be worth at that point in time assuming futures remain at the same price level and implied volatility doesn’t change from its current value of 25%. This allows us to measure what the option will cost us simply from the passage of time.

A June 2019 hog put with a strike price of $82 which is roughly equivalent to where the market is currently trading will cost about $6.00/cwt. By January 11, assuming June futures are still trading at current price levels with no change in implied volatility, this option will theoretically be worth $4.89/cwt. In other words, it will cost us a little over $1.00/cwt. for 11 weeks of time to get a better handle on the market outlook. This obviously will be different if volatility increases or decreases between now and then, and/or futures prices move higher or lower (both of which are likely), but it does help to illustrate the cost of owning options over a certain time horizon (see Figure 3.)

For many hog producers, spending $6.00/cwt. on a put option to protect Q2 margins will seem expensive and not very attractive. To be sure, this is almost half of the margin currently available so not an easy decision to make. As an alternative, some producers may want a more minimal cost structure in their hedge and may be willing to impose some constraints on their protection. A strategy that would take advantage of the current high implied volatility environment would be to buy the same put option, but pay for it by capping the upside and limiting the range of protection at lower price levels.

An example might be selling both the $94 call option and the $70 put option to offset the cost of the $82 put. For a current cost of about $1.75/cwt., this protects the same $82 floor in June hogs, but imposes a ceiling at $94 along with a limit on the downside protection below $70. In a worst case scenario outside of this $24 range ($12 above the market and $12 below), the producer would have a maximum price of around $92 for that portion of their production in a higher market, or a maximum hedge gain of about $10 against the value of their depreciated inventory should prices collapse (see Figure 4). 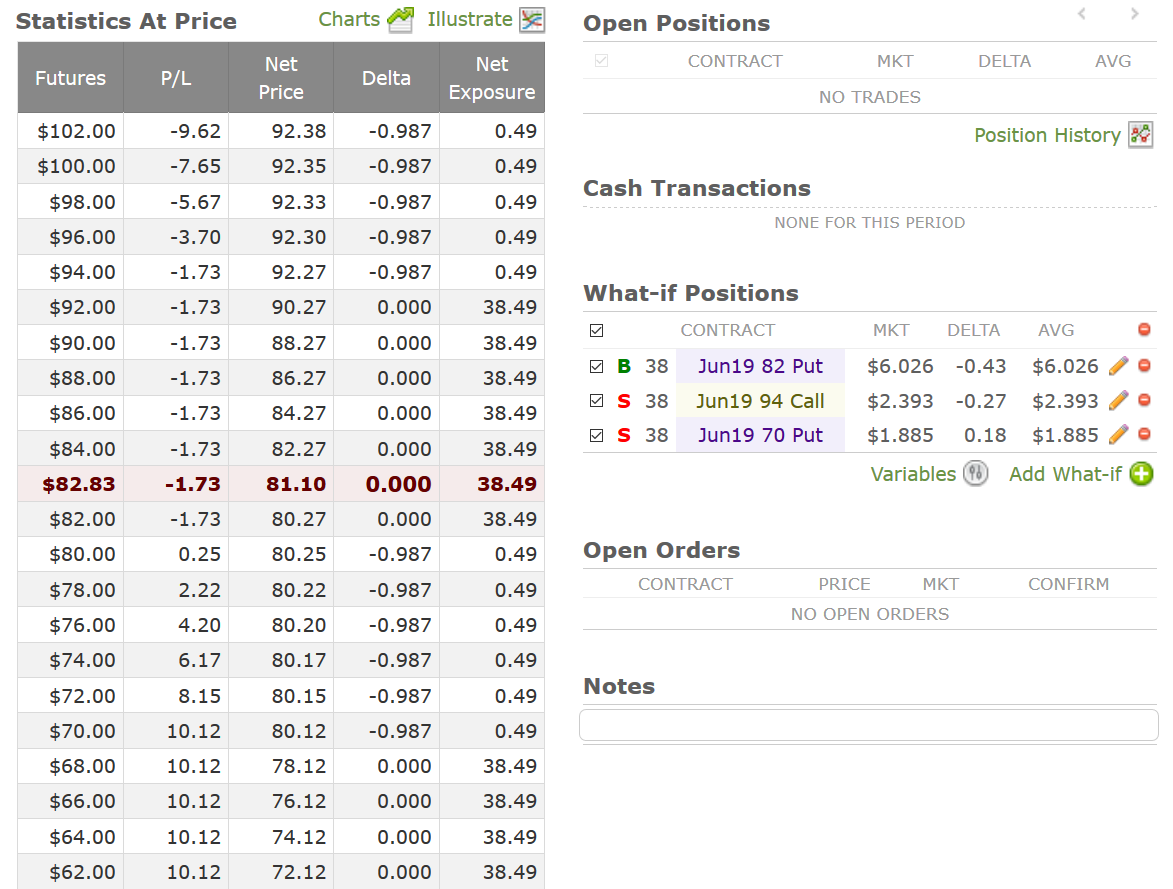 While some producers will obviously be attracted to the more limited premium expense of this strategy alternative, it comes with other costs. The maximum price feature represents an opportunity cost in a higher market. Holding feed prices constant, this equates to a roughly $10/cwt. improvement on current hog prices, or a margin of over $22.00/cwt. – well above the 90th percentile of the past ten years. Many producers may be fine capping at least some of their production at this level of profitability. Perhaps the bigger cost however is the limited range of protection to lower prices. While a $10/cwt. hedge gain is better than nothing if the hog market collapses, one could easily argue there is at least $20 of risk in either direction from current price levels given the market outlook.

The purpose of comparing these two strategies is not to demonstrate that one is superior to the other, but rather to show that they each have tradeoffs that must be weighed by producers as they evaluate their unique circumstances and priorities. Other strategies may also be considered that have different costs as well as risk and opportunity profiles. The important thing to keep in mind though is that forward opportunities do exist to protect favorable margins, regardless of how that is accomplished. For more help on evaluating specific strategy alternatives or to review your operation’s risk profile, please feel free to contact us.

There is a risk of loss in futures trading. Past performance is not indicative of future results.