With two brand new state-of-the-art pork processing plants currently opening and another one slated to open a year from now, many hog producers are no doubt celebrating the prospect of additional slaughter capacity. Hog supplies are up around 3% from last year and pushing against existing shackle space. But in addition to a sense of relief that more – and more efficient – outlets will be available to process their hogs, producers may have some concern about how the additional capacity will impact the price they receive for their hogs and their finishing margins.

More Capacity and More Competition
Seaboard Triumph Foods just opened their new facility in Sioux City, Iowa with a daily processing capacity of 10,000 head. That number could more than double, to 21,000, if an anticipated second shift is added. The Clemens Food Group’s new Coldwater, Michigan plant, which likewise just began operations, will process 12,000 head daily when it reaches full capacity and has similar room for second-shift growth. Meanwhile, Prestage Foods has broken ground in Wright County, Iowa near Eagle Grove with their new plant that will be able to process 10,000 head daily. This project is scheduled to be completed in the fall of 2018, and when finished, will likely compete with the Sioux City Seaboard Triumph facility, along with an existing Tyson Foods plant in Storm Lake, for the same supply of hogs.

Unclear Lessons from the Past
We might assume that the heightened competition among packers to get hogs in their doors would lead to higher hog prices, as packers bid up any supply not already committed to an existing plant. In addition, as those processed hogs become additional pork produced, we might expect increased competition for pork markets to lead to a lower cutout value relative to cash hog prices, and thus lower margins for packers. However, history tells us that expansions don’t always produce that result. In fact, after the last major expansion in packer capacity in 2005, packer margins remained relatively stable throughout the following year, then became more volatile (though not much higher) the year after that.

Margins are driven by many factors that are inextricably linked, and expanded processing capacity is just one component of one side of the supply-demand balance that ultimately determines prices. With increases in both packer capacity and competition, what will the net change be for hog prices? Or the cash hog – cutout price differential? The short answer to both is we just don’t know.

The X (as in Export) Factor
For the current year, the pork cutout price has held up well relative to cash hog prices, due mostly to exports. Exports now represent from 20% to 24% of total U.S. pork production, up from around 13% back in 2005 (see Figure 1), and 2017 export volume gained 12.4% from January to June. The current packer expansion was driven in part by these export growth trends, as well as expectations that they would continue. However, a large portion of exports is represented by markets that are part of trade agreements whose futures are now in question. And disruptions to these important trade relationships could have a significant impact on overall export demand. 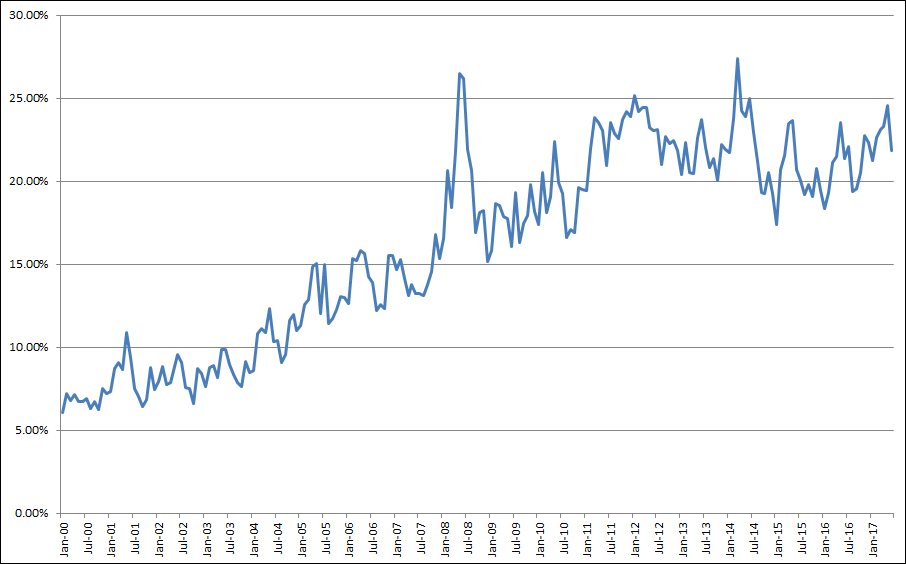 For example, the Trump administration’s decision to pull out of the Trans Pacific Partnership (TPP) opens the possibility that, unless a bilateral U.S.-Japan trade deal can be worked out, U.S. pork exports to Japan may lose their competitive advantage over EU supplies. As shown in figure 2, Japan is currently the second largest importer of U.S. pork, representing 24% of total volume. Meanwhile, pork shipments and trade with Mexico and Canada, which together represent another 41% of total pork exports, will depend in large part on the outcome from NAFTA renegotiations, which began in August and will continue into 2018.

More recently, the Trump Administration has also threatened to pull out of KORUS, the Korean-U.S. free trade agreement. If that comes to pass, according to an analysis by Iowa State University economist Dermot Hayes, we can expect a decline in live hog prices of 3.8%, or $4.71 per animal, essentially eliminating U.S. pork producers’ expected gross margin in 2017, as the European Union, Chile and other countries that have preferred trade agreements with South Korea take the current U.S. share of that market. Escalating tensions with China over trade imbalances and the handling of North Korea likewise threaten future agricultural shipments to that country. Adding to the uncertainty, a weak U.S. dollar, which certainly helped boost export demand by making U.S. goods relatively cheaper abroad – a trend that may or may not continue.

Options Offer Protection and Opportunity
Clearly, there’s a risk that hog producers may see their future margins shrink. But at the same time, with many variables at play, there’s also the possibility that margins could move in the opposite direction in either the short or long term. That’s why it makes sense for producers to not only protect their operations from potential losses, but also to position themselves to take advantage of opportunities that may arise. The way to achieve both of these objectives at the same time is by incorporating options into your margin management approach. While options can be complex, even simple option strategies can offer valuable flexibility, so it’s useful to understand how they work.

At a fundamental level, options are like an insurance policy. You pay a premium for the protection against an unfavorable price and margin outcome. When you buy an option, you gain the right to protect a price level, but you also retain the ability to take advantage of any price improvements as the market moves over time. That protection comes at a cost, called a premium. But just as you don’t buy expensive insurance policies on every asset you own, you should carefully weigh the cost of the option against the value of the benefit or protection it offers.

In contrast, the implied volatility of hog options for the June contract period, shown in figure 4, is currently at 18%. That figure is not unusual for this time of year; the 15-year average is 19%. We can therefore conclude that hog options are not as cheap as corn options, relatively speaking. You’ll also note that hog option implied volatility tends to exhibit seasonal tendencies, rising through the fall and winter before declining into spring.

For hog producers who wish to add flexibility at a reasonable cost, the extremely low current premiums of corn options offers an attractive opportunity, and many producers may be comfortable simply paying the full premium for these options up front, confident that the value of its protection justifies the initial cost. However, when considering the relatively more expensive hog options, a producer may want to consider ways to minimize the cost from the outset. Selling one option while purchasing another is one tactic for offsetting that cost, while still reducing the risk of a negative impact from market swings.

Other factors to weigh when making a strategy selection include how options for different strike prices are priced relative to each other, and how the market is pricing the probability of prices moving in one direction versus the other. Of course, the strategy that is best for you will also depend on your operation’s financial situation and your tolerance for risk.

If you’d like more information about how options can help you maintain the flexibility you need to navigate an increasingly uncertain hog margin landscape, please contact us at 1.866.299.9333 or mail@cihedging.com.