Summertime tends to bring added volatility to the corn market and this year has certainly been no different. From a life of contract low price of $3.62 ½ scored on June 15, the December futures contract proceeded to rally 25% over the course of the following month to a high of $4.54 ¼ on July 14 before essentially retracing that entire move (see figure 1). As of this writing, the market is back to around $3.80 after dropping to as low as $3.75 ¾ on July 30. While the reasons behind increased volatility during the summer vary from year to year – drought, excessive rainfall, large changes between projected and final acreage, etc., the fact remains that this time of year represents the greatest period of uncertainty surrounding the crop. This in turn creates a more dynamic price discovery process as traders try to assess a moving target of value around the growing uncertainties. Many hedgers find this added volatility to be unsettling as it creates more risk around forward margins they are trying to protect, although with this risk there are also opportunities that can be exploited. Let’s explore some of the opportunities recently presented from the perspective of both a crop farmer trying to protect the revenue value of corn they are growing, as well as a consumer raising hogs to protect the expense of corn as an input cost. 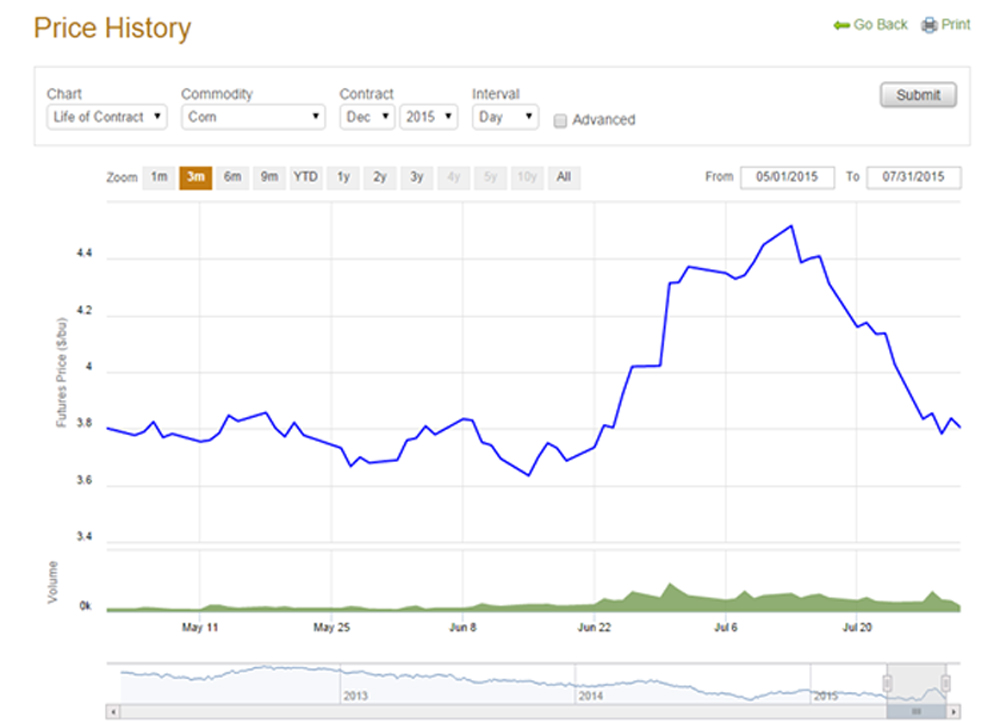 The large upward adjustment in price was certainly a welcome development for crop farmers that have not had much to feel good about this year. Unfortunately, the rally probably only meant a move back to about a breakeven level from a margin standpoint after staring at a loss of around $0.88/bushel in the middle of June based on the model operation that we track. Despite this, the move allowed corn producers to make beneficial adjustments which have provided some help against their poor margin predicament as we head towards harvest. The particular producer we will examine started his 2015 new-crop corn hedging campaign back in March of 2014. At the time, December 2015 corn was trading around $4.80/bushel. With a projected breakeven near $4.50/bushel assuming average yields, a strategy could be put in place to protect a breakeven (notwithstanding basis) while allowing upside opportunity for the market to ideally work higher. This producer bought a 470 put option and sold a 550 call option for a net cost of 17 cents/bushel. This collar combination resulted in a minimum price of $4.53 (470 put minus 17 cent cost) and a maximum price of $5.33 (550 call minus 17 cent cost).

By late September just ahead of harvest, the market had declined to around $3.70/bushel – about $1.00 below where the contract had traded earlier in the spring. With over a year to go before the December 2015 harvest but realizing that we were approaching a time of year where the market historically bottoms, the producer decided to adjust their initial hedge. Specifically, they bought back the 550 calls for a cost of 4 cents/bushel, about 18% of the 22 cents they originally received for the calls. In doing so, they effectively removed their maximum price or ceiling although added cost to their initial position. At this point, they simply had a minimum price or floor of $4.70 (put strike price) minus the total cost of 21 cents, or $4.49/bushel – essentially right at their projected breakeven point.

After recovering to around $4.40/bushel by the end of the year, the market continued lower through Q1 into the spring. The producer made a second adjustment in April, rolling down the 470 puts to capture equity while still maintaining protection to lower prices. The 470 puts were sold for 81 cents and replaced with 390 put that cost 16 cents. As a result, the producer received a net credit of 65 cents or 81% of the range between 470 and 390. This effectively gave them a new minimum price of $4.34/bushel. While some may wonder why a producer would rather have a minimum price of $4.34 (new position) versus $4.49 (previous position), it is important to remember that in the previous position there was a net cost of 21 cents where now there is currently a credit of 44 cents. This is a big difference. It should also be pointed out that the 390 puts that replaced the 470 puts were short-dated new-crop August options. The benefit of doing that is while the option is still priced off the December futures contract, it expires sooner and thus costs less. This effectively allowed for a larger credit to be received rolling down the 470 puts that were previously owned.

Finally, the market recovered sharply over the last half of June, getting close to the previous highs in December. The producer decided to capitalize on this rally by getting out of the short-dated August 390 puts and replace that position with a futures sale at $4.32/bushel. The 390 puts recovered 2 cents of residual value, so in total there was a net of 46 cents credit generated over the position’s lifetime. Adding this credit to the futures sale at $4.32/bushel, the net price is now $4.78/bushel. This is 25 cents higher than the initial minimum price of $4.53 established back in March of last year, mainly because what was at first a net cost eventually turned into a credit over time following a series of thoughtful adjustments.

Now let’s turn to a hog farmer and discuss how they managed their exposure to higher feed prices over time on this same December corn futures contract. This particular consumer purchased corn back in September of 2014 in one of their tranches of coverage for Q4 of 2015 when their projected profit margin hit the 80th percentile of the previous 10 years. Given their margin management policy which lays out a plan for the operation to add margin protection at this threshold, they purchased December 2015 corn futures at $3.84/bushel along with a similar long futures position to protect rising soybean meal costs and a flexible hog position using options to protect their sale revenue. By mid-July, the projected Q4 margin on the open market had deteriorated to under the 10th percentile of the previous 10 years, indicating a loss of around $8.00/cwt. The consumer made an adjustment to their corn position by selling the futures at $4.47/bushel and replacing it with a call spread. Specifically, they purchased the December 450 calls and sold the 500 calls at a net cost of 15 cents/bushel. This adjustment generated a net credit of 48 cents, based on receiving 65 cents for getting out of the futures position ($4.47 – $3.84) minus the 15 cent cost for the call spread. As a result, they had an effective maximum price of $4.02 (450 long call minus $0.48 credit) that was capped at $5.00/bushel (short call).

Similar to questioning why the crop farmer would want to have had a minimum price 15 cents lower than their previous position, some may be wondering at this point why the hog farmer in this example would want to have a maximum price 18 cents higher than what they had before and have their protection capped above the market? The answer again lies in the fact that the adjustment is generating a credit which can be put in the bank, although this benefit has a cost with a position that will not be as effective in protecting the risk of higher prices. As the crop farmer was making their adjustment at this price level in the mid-$4.00 range to capitalize on higher prices and strengthen their hedge by locking into futures, the hog farmer in this example is making the adjustment to weaken their hedge by making it more flexible – adjusting a long futures position into an option spread. In each case, both the crop farmer and the hog farmer expect the market to move lower. The crop farmer will be better off having a stronger short hedge in a declining market while the hog farmer will likewise benefit having a weaker long hedge as the corn market goes down.

The hog farmer recently made another adjustment to their position in late July, getting out of the call spread and replacing with a long December futures position. Specifically, they received 4 cents of residual value getting out of the 450/500 call spread and purchased futures at $3.84/bushel – the same price level they originally purchased the contract at back in September. Let’s now examine the math in retracing the two separate adjustments to determine the exact price level they have their corn fixed at now that they are long futures again. They received a net credit of 48 cents initially getting out of the futures and purchasing the call spread earlier in July. The second adjustment took on a 4 cent cost and fixed futures at $3.84/bushel. They therefore own the corn at a net price of $3.40/bushel ($3.84 futures price minus 44 cent net credit), or $0.44 below where they started. You will notice that while both the crop farmer and the hog farmer each made separate adjustments to address the unique impact the corn volatility had on their profit margins, in each case their prices were improved. The crop farmer ended up with a higher sale price than they started with while the hog farmer has a corn cost lower than where they began.

Another point to make on these separate adjustments is that they were largely driven by margin considerations. The margin improving for the crop farmer triggered the decision to strengthen their short hedge while the deteriorating margin for the hog farmer triggered the decision to make their hedge more flexible. While not all adjustments are necessarily obvious, and certainly in each of these cases other adjustments could have been made to the corn positions over the timeframe referenced, the margin itself can help identify potential adjustment opportunities. The point with any adjustment is to improve the position and the overall profit margin as a result of managing volatility over time. While a large part of margin management is simply having a plan and executing margin strategies when targets are reached, as in the case of the hog farmer, improving margins over time through active adjustments is also a big part of what is meant by managing margins.

Our educational seminars focus on teaching ways to mitigate margin risks in producers’ operations by first creating a plan to manage their forward risk exposures. From there, we discuss implementing that plan and how to evaluate margin protection strategies to initiate coverage. Regardless of the operation in question or the initial strategy chosen, positions need to be monitored periodically so we devote a section of the class to address position management over time and making strategic adjustments to strategies while weighing their costs and benefits. We invite you to come to one of our seminars and hope to leave you with some fresh ideas on how to manage margin risk in your business, as well as some best practices to help assure success in your margin management endeavors.