Last summer, we wrote an article in Margin Manager focusing on the corn market and adjustment opportunities that came out of the brief period of volatility that saw new-crop December futures rally 25% from mid-June to mid-July in response to weather concerns. This spring, the soybean meal market is experiencing a similarly sharp rally, with July futures having risen over 30% since early April due to excessive wet weather in Argentina causing concern over their soybean crop (see Figure 1). The market remains elevated at these levels with strong domestic demand in the U.S., uncertainty over South American crop prospects, and expectations of lower soybean acreage this season at the expense of corn. Meanwhile, massive short-covering from non-commercial traders has helped fuel the rally (see Figure 2). Although the price increase has been quite impressive, there are reasons to believe the market may have gotten ahead of itself and the advance is overdone. Perhaps the strongest argument stems from the fact that the supply/demand balance for soybeans and soybean meal remains more than adequate both in the U.S. as well as the rest of the world (see Figures 3, 4). Even with potential crop losses from Argentina factored into the equation, it would take a significant loss in U.S. production this summer to begin tightening the balance sheets enough to cause global supply concerns. On that note, the current rally in both soybeans and soybean meal has not gone unnoticed across the Farm Belt and may still influence planting decisions with prices potentially buying back lost soybean acres. 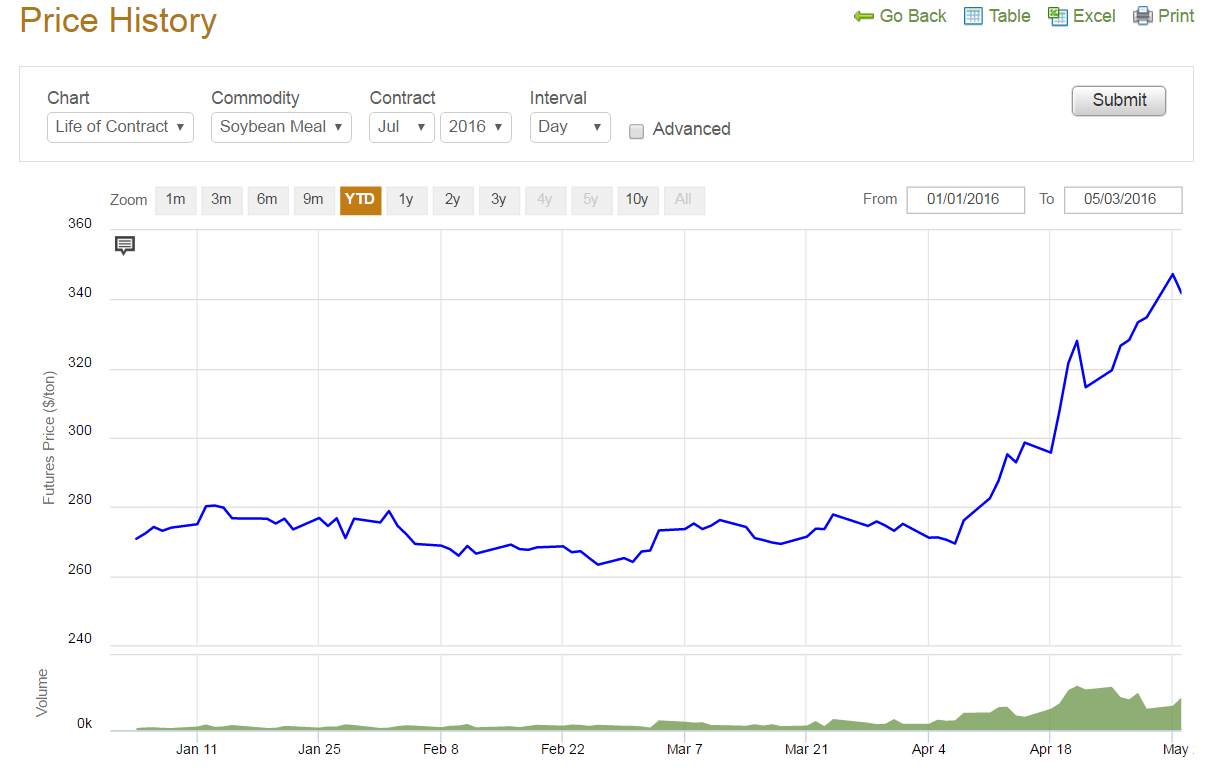 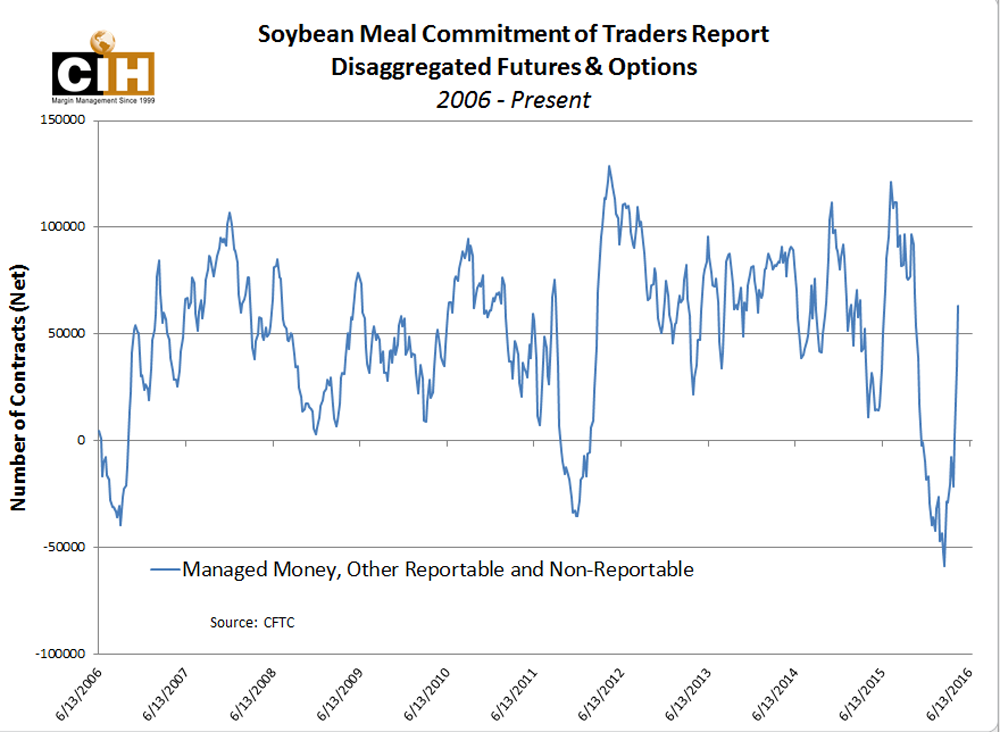 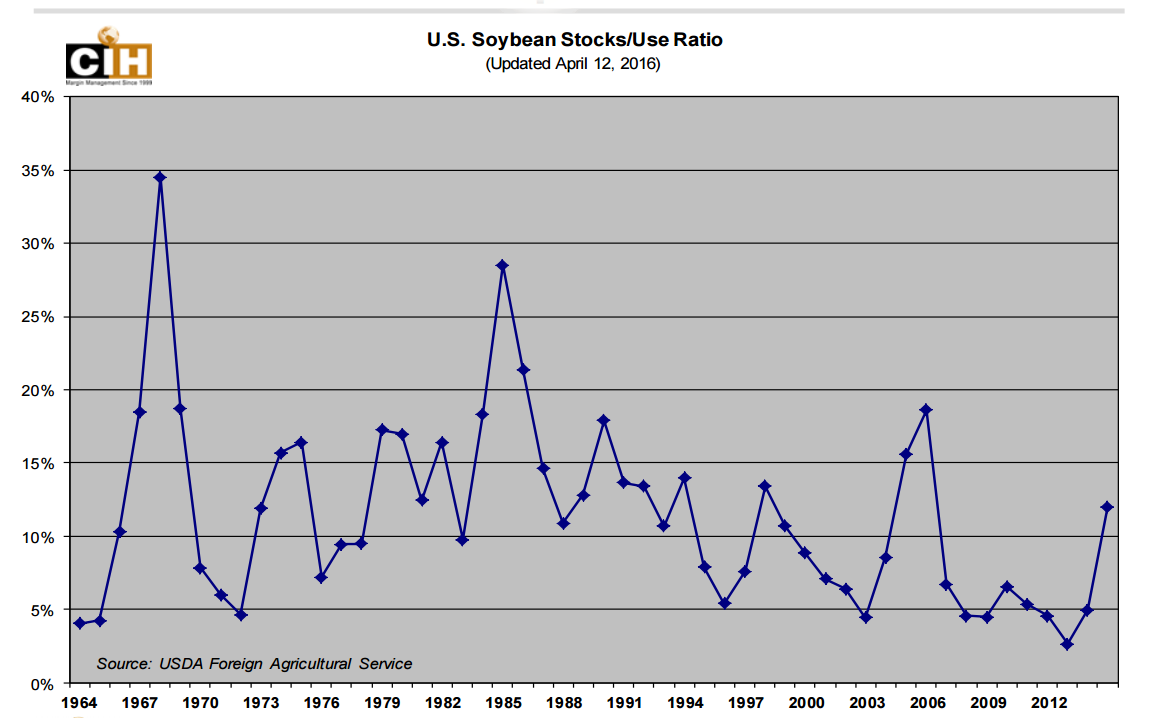 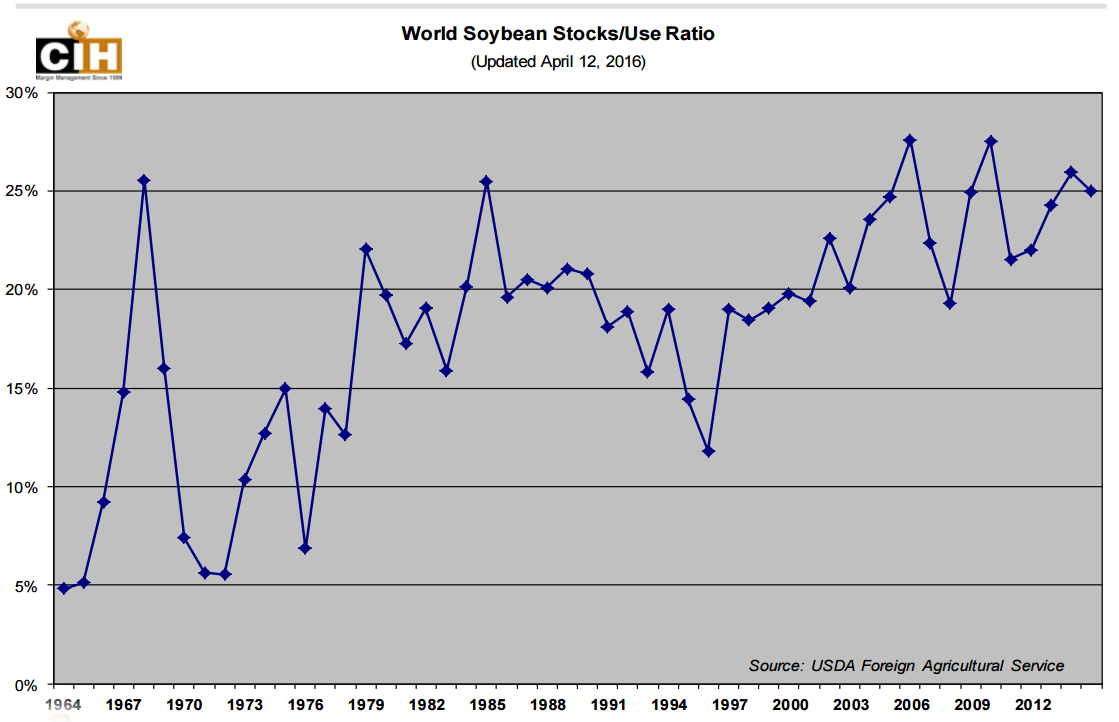 As recently as late March, new opportunities were showing up for hog producers to protect margin levels for Q2 and Q3 above the 80th and 70th percentiles, respectively, of the previous 10 years (see Figures 5, 6). Many operations that we work with initiated new coverage in response to these margin opportunities not only in nearby marketing periods, but further out in time as well to put protection in place for both feed input costs and hog revenues. While margin strategies varied across operations as well as between input costs and revenue hedges, many producers chose to protect soybean meal with either long futures positions or long call options. The reasoning behind this stemmed from the fact that soybean meal prices were trading at multi-year lows, the market was in a period where historically prices have tended to rise between February and May, and implied volatility of options was also very cheap from a historical perspective trading at 10-year lows. At the time, both the July and September Soybean Meal futures contracts were trading around $275/ton. Consequently, if a producer didn’t purchase futures as an input hedge on their meal needs, they likely bought a 280 call option to protect against higher prices in order to retain the opportunity for a potential savings in a declining market. During the second half of March when these margin opportunities would have triggered, a July Soybean Meal 280 call option would have cost around $6/ton while a September Soybean Meal 280 call option would have been about an $11/ton cost. 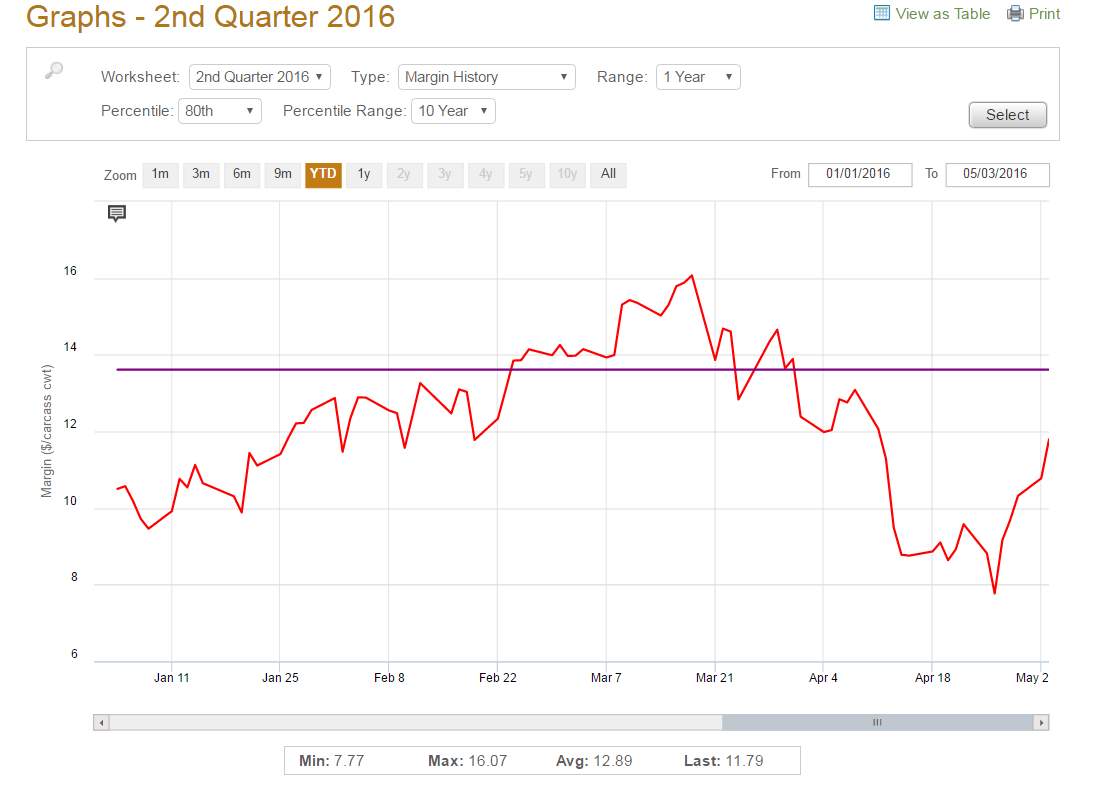 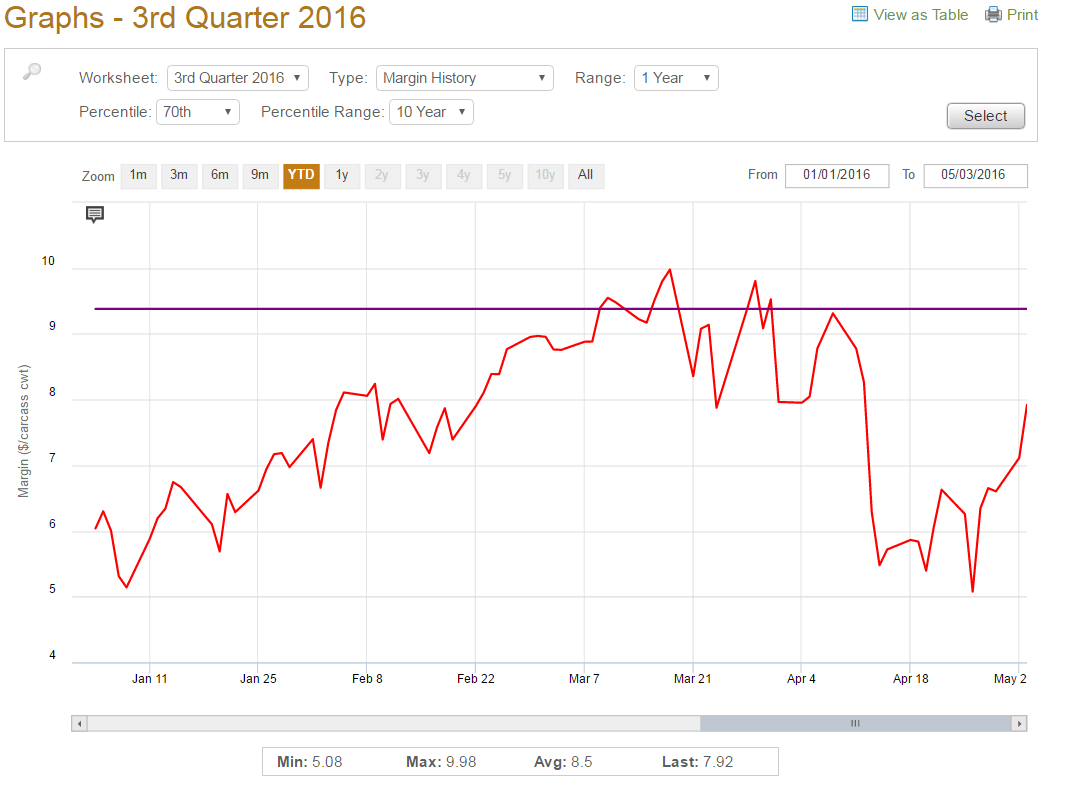 Since that time, both the July and September Soybean Meal futures contracts have risen about $70/ton and are currently trading around $340/ton. As a result, anyone who initiated a strategy to protect meal from higher prices has a significant amount of unrealized equity built up in that position. While the open trade equity on a long futures position would be roughly equal to $70/ton depending on the price level at which the hedge was initiated, both the July and September 280 call options have appreciated quite a bit as well. The value of the July 280 call is now approximately $62/ton while the September 280 call is worth around $65/ton at current price levels. This implies that a long call option position at this strike price similarly has about $55/ton of unrealized equity based upon costs during March. While the market may obviously continue moving higher, this represents quite a windfall in a relatively short period of time. It might be prudent to protect some of this unrealized equity that has built up in the position while at the same time maintaining protection to higher prices. In order to accomplish this, it would be necessary to make an adjustment to the current position.

Let’s first consider the case of a long futures hedge. As an example, let’s say this hypothetical hog producer bought July Soybean Meal futures back in March to protect an 80th percentile margin at a price of $270/ton. The current price is trading at $345/ton so there is an unrealized gain on the position of $75/ton. They therefore could cash out of this position and realize that gain; however, they would then be exposed to higher prices if the market continued advancing. To address this risk, they could purchase a 350 call option that would protect them to all higher prices above that level. A July 350 call option is currently trading at about $15/ton. They would essentially be spending $15 to protect a $75 gain, or 20% of the accrued equity. Whether or not this makes sense would be up to the individual operation, although the worst case scenario is that they would be increasing the cost basis of their current long futures position. In a rising market, they would still be protected to all higher prices although now they would be adding $15 cost and there would be a gap of $5/ton between where the market is currently trading at $345 and where the call would begin protecting them above $350. If the market were to fall however, it only has to drop by $15/ton before their position would improve. Therefore, a producer who thought there was a reasonable chance for July Soybean Meal futures to be below $330 sometime between now and late June when the options expire could realize a substantial benefit by making this adjustment.

Now let’s consider the case of a long call hedge. Assuming a producer bought the 280 call option back in March to protect against higher soybean meal prices, the evaluation is similar but slightly different. The call option is now worth significantly more than what it originally cost, but there is not as much equity in the position. Let’s say the producer paid $6/ton for the July 280 call option back in March which is now worth $62/ton based on the current futures price. They might consider selling this call and replacing it with a 350 call that costs $15/ton. By selling the 280 call for $62 and buying the 350 call for $15, the producer will receive a net credit of $47/ton. In turn, they have reset their right to a maximum purchase price $70 higher than where it currently exists ($350 vs. $280) so they effectively only capture about 67% of that range ($47/$70). While this does not look as attractive as the 80% comparison on the long futures adjustment, it nonetheless does still represent a large percentage of what the market has gained by. In addition to rolling the existing long 280 call option to a higher strike price of 350, the producer may also consider selling a 400 call option which would generate an additional credit of about $5/ton. While the total credit of $52 received would represent a higher percentage of the $70 the market has increased by, the tradeoff would be that the producer would no longer be protected for prices higher than $400/ton. All the same, there would still be protection for around $50 of higher prices from current levels and a producer might reasonably assume that most of the price advance has already occurred. Moreover, the implied volatility of soybean meal options has spiked as a result of the recent rally, and it is getting closer to expiration which would also present reasons to consider the additional adjustment of adding a short call above the market (see Figure 7). 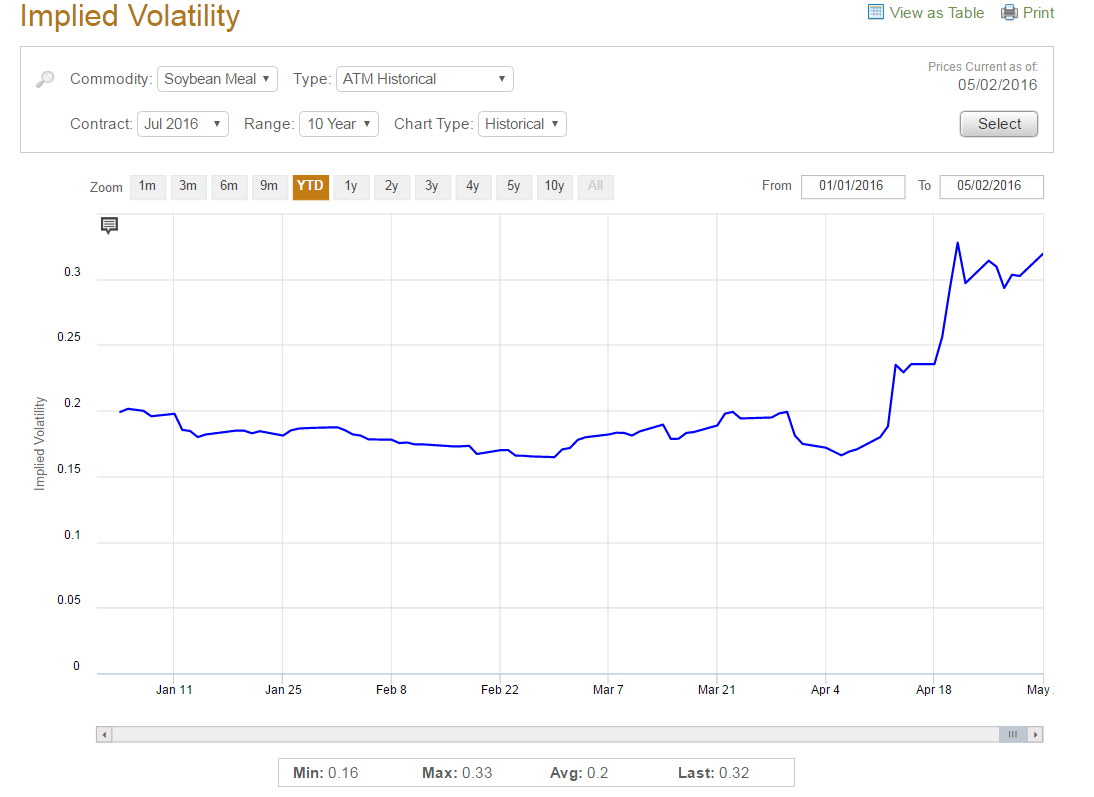 With any adjustment, there is always a tradeoff and the costs versus benefits need to be weighed in order to determine whether it makes sense. Generally speaking, if you can capture 75%-80% of a large move in price well ahead of expiration, it usually presents a compelling case to consider adjusting an existing position. In the two examples presented here, the proposed adjustments fit those criteria. First, the soybean meal market has advanced by over 30% or $70/ton which is a large move. For the long futures hedge position, adjusting into an at-the-money 350 call option for a $15 cost captures 80% of the $75 gain the futures position has realized. For the long call hedge, 74% of the range can be captured rolling the 280 call up to a 350 call option, as long as the producer is willing to also cap their protection above $400/ton. We will obviously have to wait and see whether or not these potential adjustments will help improve the position if soybean meal happens to eventually sell off, but they do represent a strong argument to at least consider making.