Last month, we wrote about the topic of seasonality which brought up an interesting question. Is there a certain period of time which is best to begin a margin management program?  The article touched on the idea that for a margin management plan to be successful, a producer needs to stick with it over a long period of time to see the benefits through an entire profitability cycle.  The obvious question then is at what point of the cycle would be ideal to start this type of program?  Generally speaking, if I am “locking in” a profit margin for my operation, I would prefer to do so at a peak of profitability.  This implies that I have not given up any opportunity from improved margins and I am completely protected from margin deterioration as profitability begins to weaken.  The problem of course is that no one has the benefit of foresight to know for certain whether or not we are at a peak point of profitability within a given cycle.

It is important to remember that margin management is forward looking.  Not only am I protecting margins for a near-term production period, but I am also looking at forward production periods that may be as much as a year or more further out in time.  While there is no way of having the foresight to know whether or not margins in a nearby or forward period will strengthen or weaken from current projections, it is possible to put these margins into an objective, historical context in order to evaluate the relative opportunity being presented.  As an example, current profit margin projections for both the hog and dairy industries are reflecting record profitability when evaluated on a rolling four quarter basis from nearby periods.  In other words, if I am considering nearby margins for Q2 as well as margins for the next three quarters of Q3, Q4, and 2015 Q1, and then average them all together, there is no other period looking back in history where the average margin on a rolling four quarter basis has been stronger than it is right now.

If I am a dairy operation or a hog producer, this means that if I were to start a margin management program and implement a plan to protect the next four quarters of profit margin, there has never been a better opportunity than at present to begin doing so.  While this of course is no guarantee that the profitability profile cannot strengthen further from current projections, it is reassuring to know that I would already be starting at record levels.  The following graphs depict the current margins for both the dairy and hog production industries on a rolling four quarter basis going back to 1997. 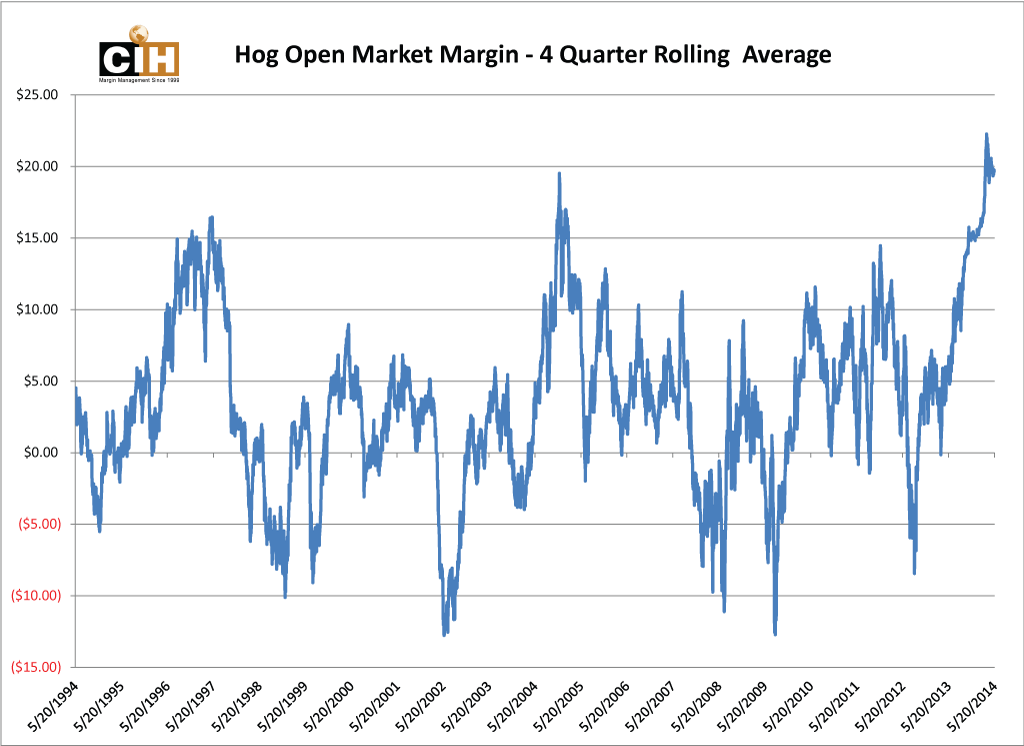 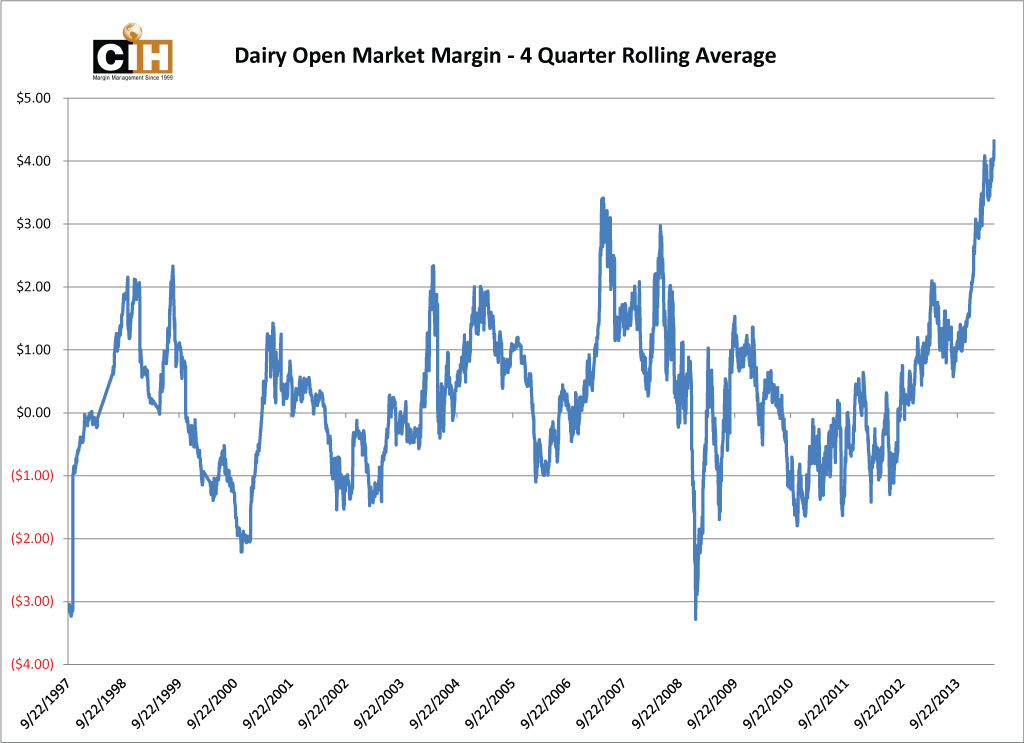 One of the common things we hear about reluctance to start a margin management program when times are good is that a producer does not want to give up the opportunity to participate in further margin appreciation.  This is particularly true when we are coming out of a period of severely depressed margins.  Producers in both the dairy and hog industries can certainly identify with horrible margins experienced during 2009-2010, as well as more recently in the second half of 2012 through early 2013 following the historic drought a couple years ago and the soaring feed costs that accompanied it.  It is easy to simply ride the open market during periods of strong profitability, but it is precisely at these times when starting a margin management program can be the most beneficial.  Because these industries are cyclical in nature, we know that eventually the profitability cycle will turn lower.  While it is impossible to know what specific factors will pressure margins over time, or when this pressure will begin, it is extremely rare to have not only spot margins but the average projected margin for a year forward in time be this strong and present this kind of opportunity.

Many producers we talk to tend to be more interested in learning about and implementing margin management during very poor periods of profitability.  While this is understandable in the sense that  there would be a more pressing need for protection when the operation is losing money, that does not mean it is an ideal time to begin managing forward margins.  If you are already starting from a much above average period of historical profitability, you are putting yourself in much better position to get ahead as the odds are in your favor.  In the investment world, many money managers tout the idea of dollar cost averaging.  The theory behind this is that by investing the same amount of money on a regular schedule throughout the year, you average out the swings in the stock market such that your risk of having too much capital going to work in front of a significant correction is mitigated.  Ideally, you would like to wait and invest all of your money at market bottoms such as in the spring of 2009.  The problem obviously is that you do not have the foresight of knowing when the market is going to bottom.  While perhaps not an exact parallel, being able to protect the next 4 quarters’ margin at current levels might be likened to starting an investment program after a huge selloff in the market.  You can’t know for sure that the market will not continue going down, but the odds are certainly more in your favor.