In October, 2014 we featured an article in Margin Manager titled, “The Dairy Margin Protection Program – Is It Right for Me?” At the time, we were writing about the features of this new risk management program for dairies that was part of the Agricultural Act of 2014 to provide a safety net during periods of catastrophic industry-wide losses such as were experienced in 2009 and 2010. There were many questions at that time about whether or not the program was a good fit for any particular dairy, how the costs of the program compared with using exchange-traded equivalents, and if a dairy producer should sign up as well as what coverage level to elect. With the program now entering its second year (technically third if you count 2014), we thought it would be a good opportunity to revisit how MPP has worked so far with 2015 now finished and the first 2-month calculation for indemnity payments having just concluded for 2016.

The following table summarizes the MPP results for both 2015 and the first two months of 2016, reflecting the component prices for corn, alfalfa hay, soybean meal and all milk in the margin calculation for each calendar month, along with the milk margin pay period composite price for each 2-month averaging period: 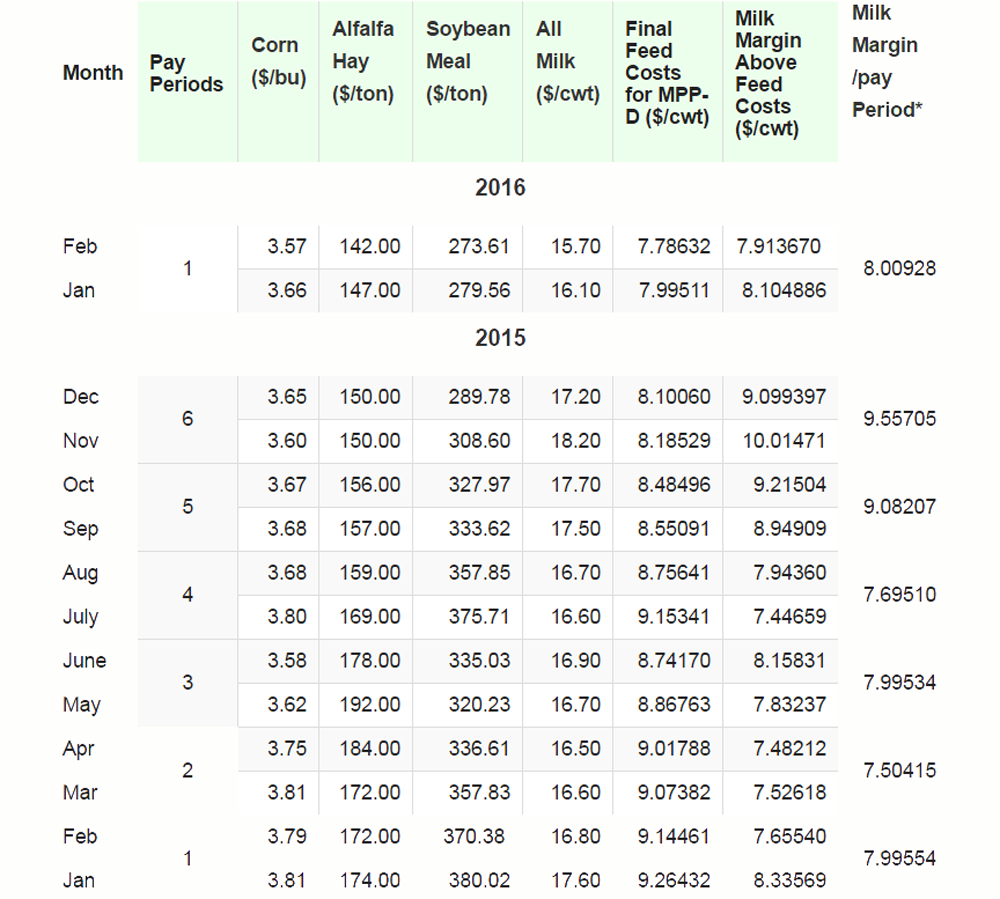 The milk margin calculations for 2015 resulted in indemnity payments only getting triggered twice, during the March-April averaging period with a composite margin of $7.50415/cwt. and again in the July-August averaging period with a composite margin of $7.69510/cwt. While the composite margin calculation was technically below $8.00/cwt. during two other averaging periods in 2015 (Jan-Feb and May-June), it was only by a fraction of one cent and effectively did not trigger indemnity payments as a result. Even for the two times that the program did trigger a payment last year, only once was it barely able to cover the cost of the premium for the highest level of coverage, and that was only if you were insuring less than 4 million pounds of production. The table below from our last article revisiting MPP highlights this $0.475/cwt. premium for the first 4 million pounds of annual production: 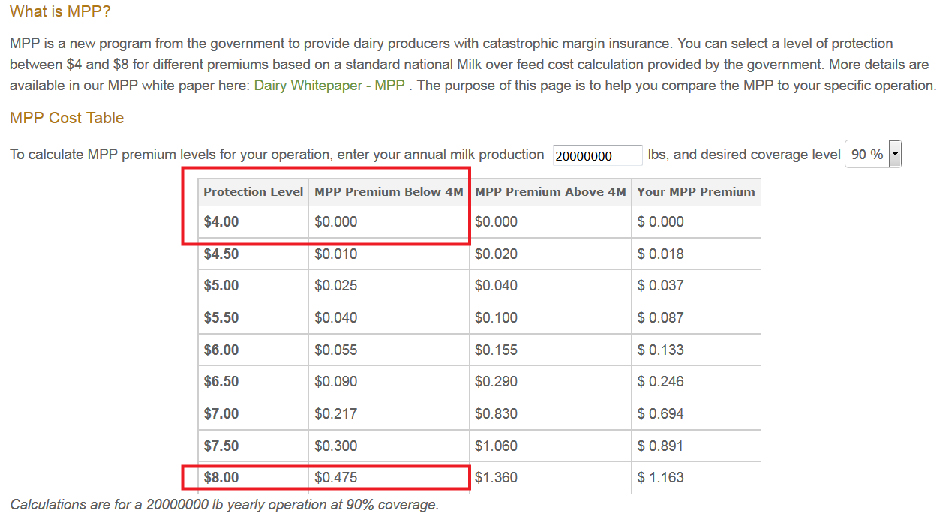 Looking at this year, margins have come down substantially from where they were in the fall, however the composite margin for January and February will fail to trigger an indemnity payment with the average just above $8.00/cwt. The last time the 2-month average margin was close to the current calculation was during May-June of 2015. What you will notice from the first table though comparing then to now is that price levels for every component of the margin were generally higher than what they currently are in early 2016. The all-milk price was about $1.00/cwt. higher in the upper $16 range, alfalfa hay was as much as $50/ton higher last May at $192 while soybean meal was similarly about $50/ton higher than where it is presently. Corn prices have actually been quite steady over that time frame at least based upon monthly averages. This dichotomy exposes one of the potential problems with MPP as a risk management tool for dairy producers. Because the calculation is based on both feed costs and milk prices, it is not necessarily effective for dairies that produce their own feed or that have previously established a price for their feed in the local market. 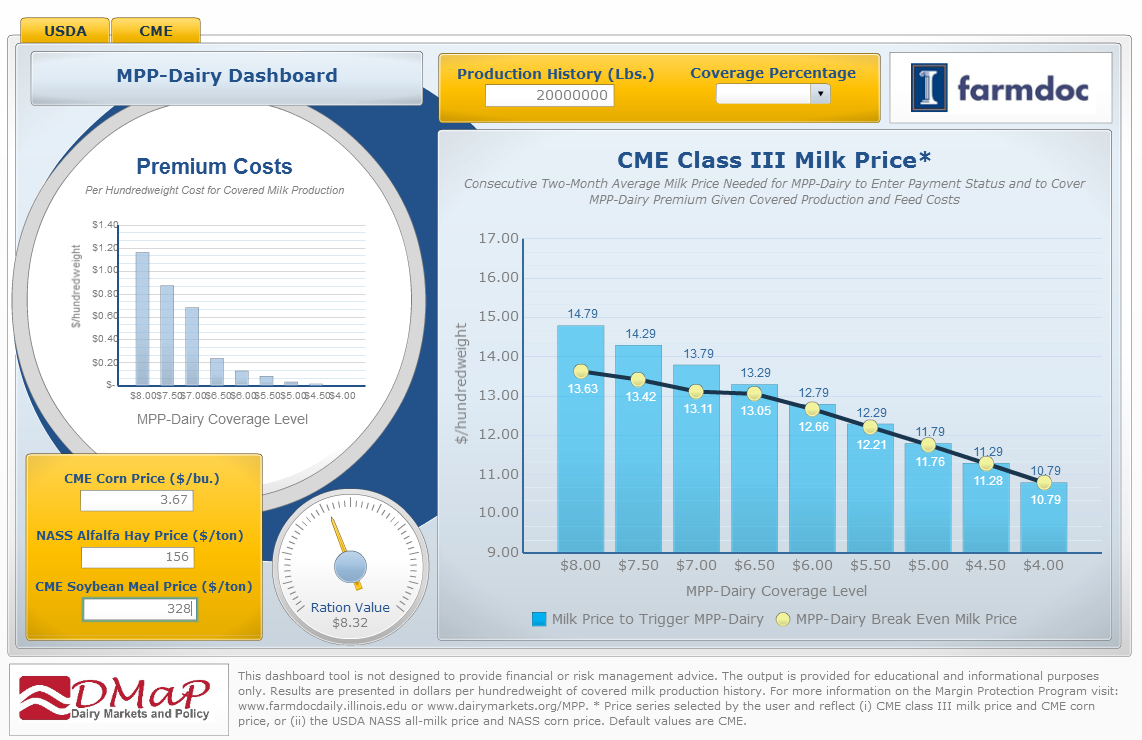 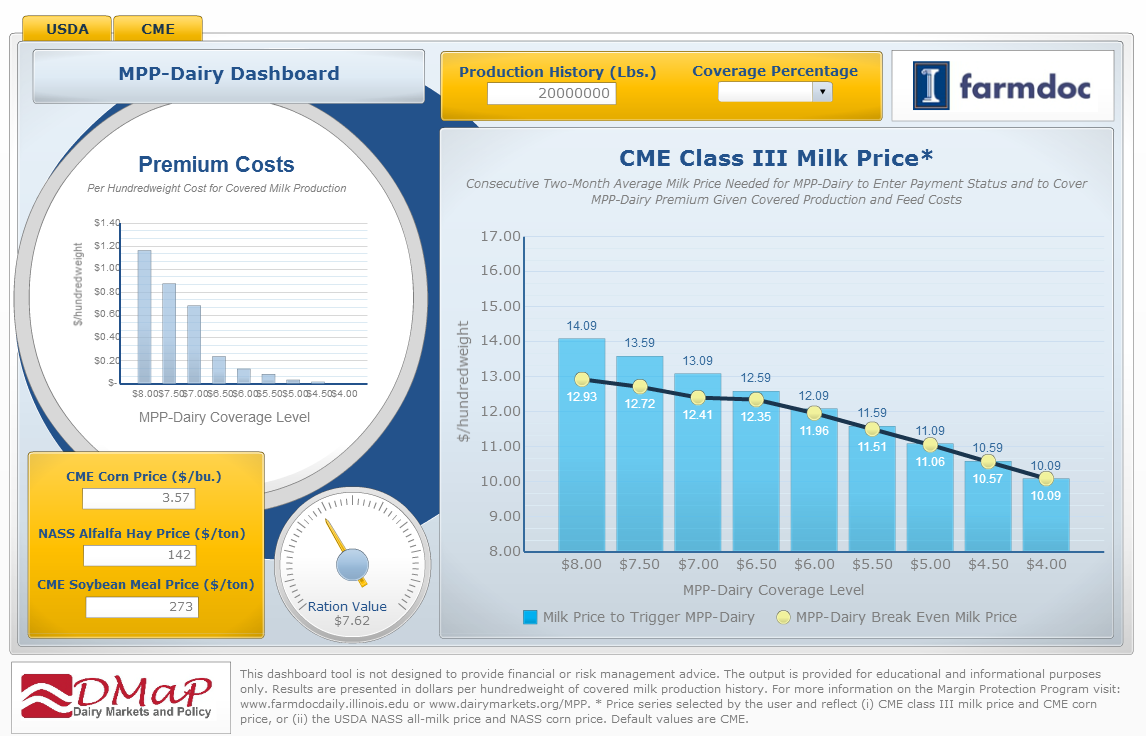 Because of this dynamic, it may have been a fallacy of dairy producers to assume they had a “floor” on their milk at a higher level when in reality that floor was contingent on feed costs holding steady. This therefore would have hurt a dairy utilizing MPP whose feed costs were already covered last fall, but was effectively open to milk prices on the open market. Another topic we touched on in our initial article and when revisiting MPP last year was that the program was really designed as a catastrophic insurance policy to protect dairy producers during extreme, industry-wide negative margin scenarios. While dairy margins have been declining back to the minimum threshold necessary to trigger indemnity payments under MPP, the reality is that most dairy producers are already underwater with margins below breakeven. Below is a graph illustrating current margins for a model dairy operation that we have used in the past to demonstrate the efficacy of MPP: 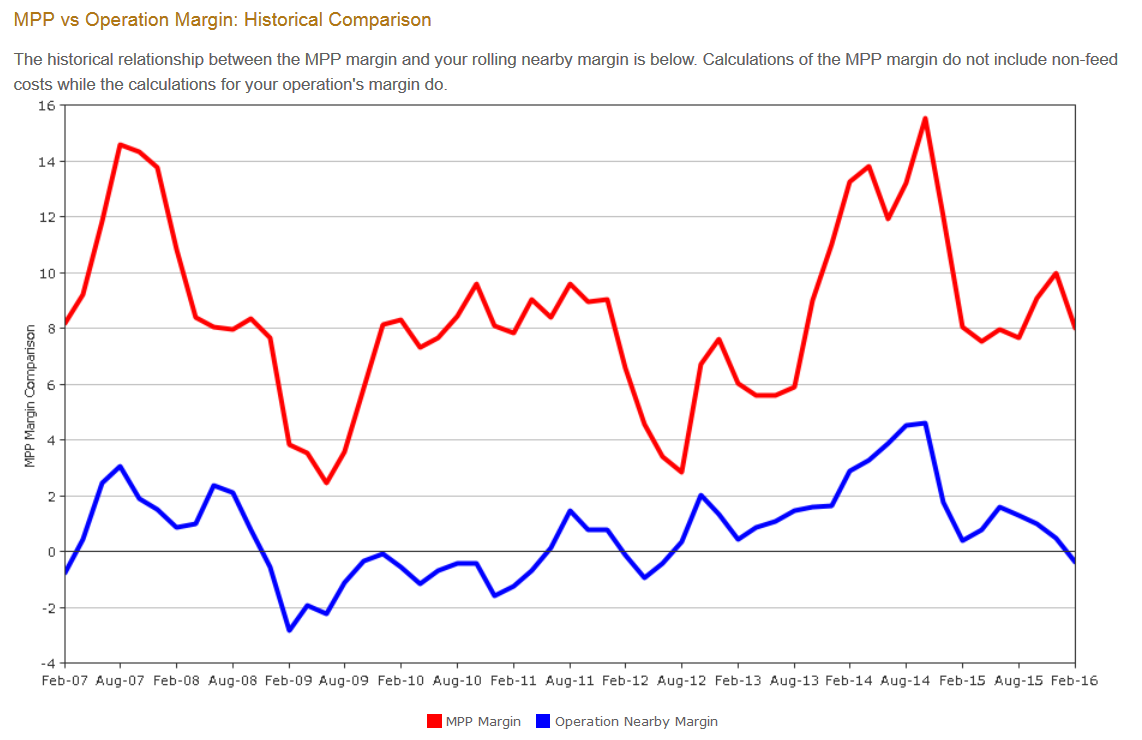 Moreover, the forecast for forward margins based upon current futures prices also suggests that payments under MPP may be limited to all but the highest levels of coverage despite the fact that actual farm margins may be showing losses through at least the first half of the year. While outcomes may obviously change based on how both milk prices and feed costs fluctuate over the next few months, the bottom line is that most dairies will likely not see much benefit from MPP for the foreseeable future given the current dynamics in the market: 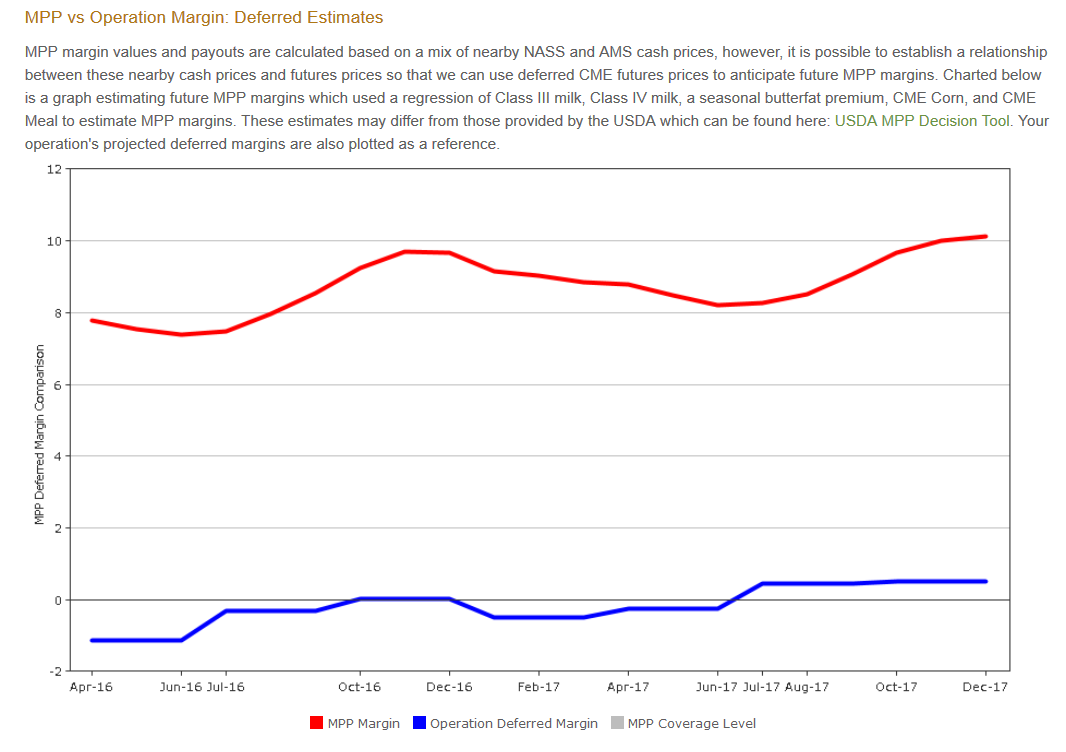 While it remains early in the MPP program and much can change over the next few years through 2018, initial results seem to indicate what had been expected from the onset. MPP may not be the most effective means of protecting margin risk for dairy producers. Because high thresholds of margin protection under the program are costly compared to exchange-traded alternatives which only address a breakeven scenario for many producers at best, it may be better to supplement MPP coverage at lower thresholds of protection with other contracting through local counterparties or the exchange. Moreover, because not all producers will have the same degree of risk exposure with regards to feed, MPP may further be limited in its efficacy to protect milk prices in a sharply falling market such as we have experienced since last fall. Although MPP is certainly one tool that may be considered as part of a dairy’s risk management program, it should probably be used in conjunction with other alternatives in a comprehensive margin management plan.