Dairy producers face a unique challenge in margin management that their counterparts in the swine and beef cattle industries do not share. Unlike cattle and hogs where there is only one futures contract that serves as a benchmark of value for forward revenue projections, dairy producers have multiple contracts including Class III and Class IV Milk, cheese, butter, powder, whey and nonfat dry milk. As a result, understanding how to project forward prices using the futures market as a price discovery mechanism, and further how to protect those prices using those contracts’ risk transfer functions becomes more confusing for a dairy. In order to make sense of this, it is important for dairy producers to understand how they are paid for their milk. From there, the relationship between the cash price dairies receive for their milk and futures prices that serve as a benchmark for this value in a forward time period can help producers get a better handle on how to manage their milk revenue in a comprehensive margin plan.

First, all dairy producers receive what is known as a “Uniform Blend Price” for the milk that they market commercially to their coops and creameries. The Uniform Blend Price essentially represents a pooled value for milk based on the utilizations for that milk in each part of the country where it is marketed. Raw fluid milk is processed and utilized in a variety of dairy products which varies from one area to another. As a result, the value of the milk pool likewise varies from region to region as milk is processed for different purposes in different areas.

There are four classifications of milk with the following distinctions:

Regardless of the particular area or region of the country, milk is utilized in all classes every month, and the milk payments received by producers reflect the value of milk across these various classes. Because some classes have higher utilizations than others depending on the particular marketing order, producers receive different values for their milk.

While there are several dairy futures contracts that trade on the CME, Class III Milk is widely regarded as the benchmark value for milk across the country. This in part stems from the fact that the liquidity is highest for this particular contract and it is the most widely used among market participants, even beyond the hedging realm. Although most dairy producers reference the Class III price as a benchmark for the value of their milk, the reality is that their milk check is not based solely on this Class III value as the uniform blend price represents the utilizations for all classes of milk in their pool. In the component pricing orders (Northeast, Upper Midwest, Central, Mideast, Pacific Northwest, and Southwest) this creates what is known as the Producer Price Differential or PPD.

A simple way to think of PPD is that it represents the remaining value in the pool after paying the producer Class III. Dairy producers are paid only the Class III price (protein, butterfat, other solids) for the milk they market regardless of what the milk was used to produce. In that way, the producer may not receive the value of higher-priced classes nor lower priced classes. The Producer Price Differential is meant to shore up the difference between Class III payment and the remaining value in the pool. This could result in a negative value if Class III payments are in excess of the total pool value (a negative PPD).

This differential fluctuates from month to month as a function of the value of Class III relative to the other milk classes. Producer price differential is calculated as follows: 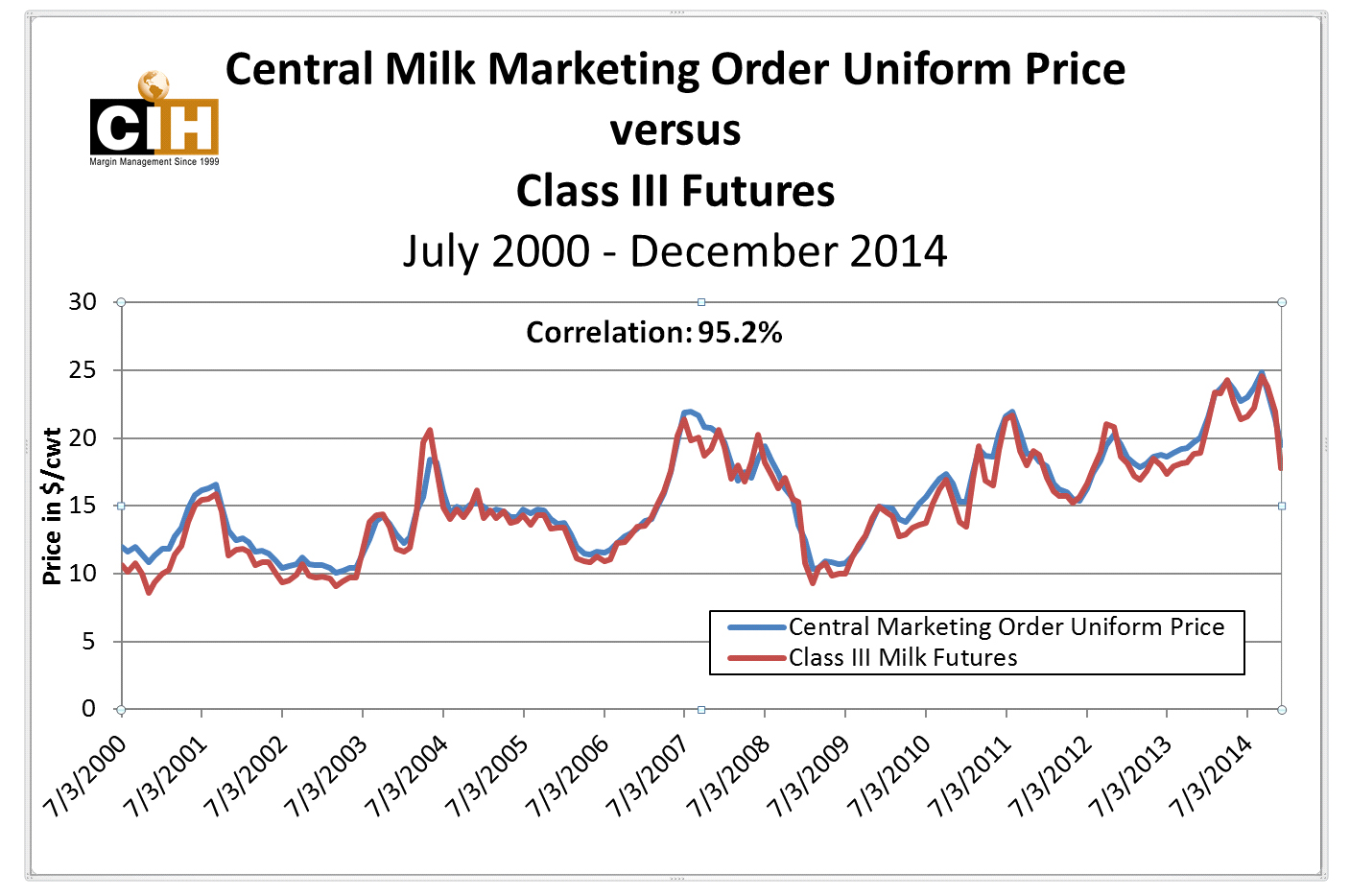 Getting back to the futures market and the various dairy contracts available to use as a hedge against their future milk check, there is both a Class III and a Class IV milk contract. When analyzing what goes into the pricing for each of the four milk classes, it is interesting to note that all of them relate to Class III or Class IV in some way. Because of this, the uniform blend price that a producer receives for their milk will be influenced by both the Class III and the Class IV price. A look at the determinants of price for each class of milk can show the impact of Class IV on the uniform blend price: 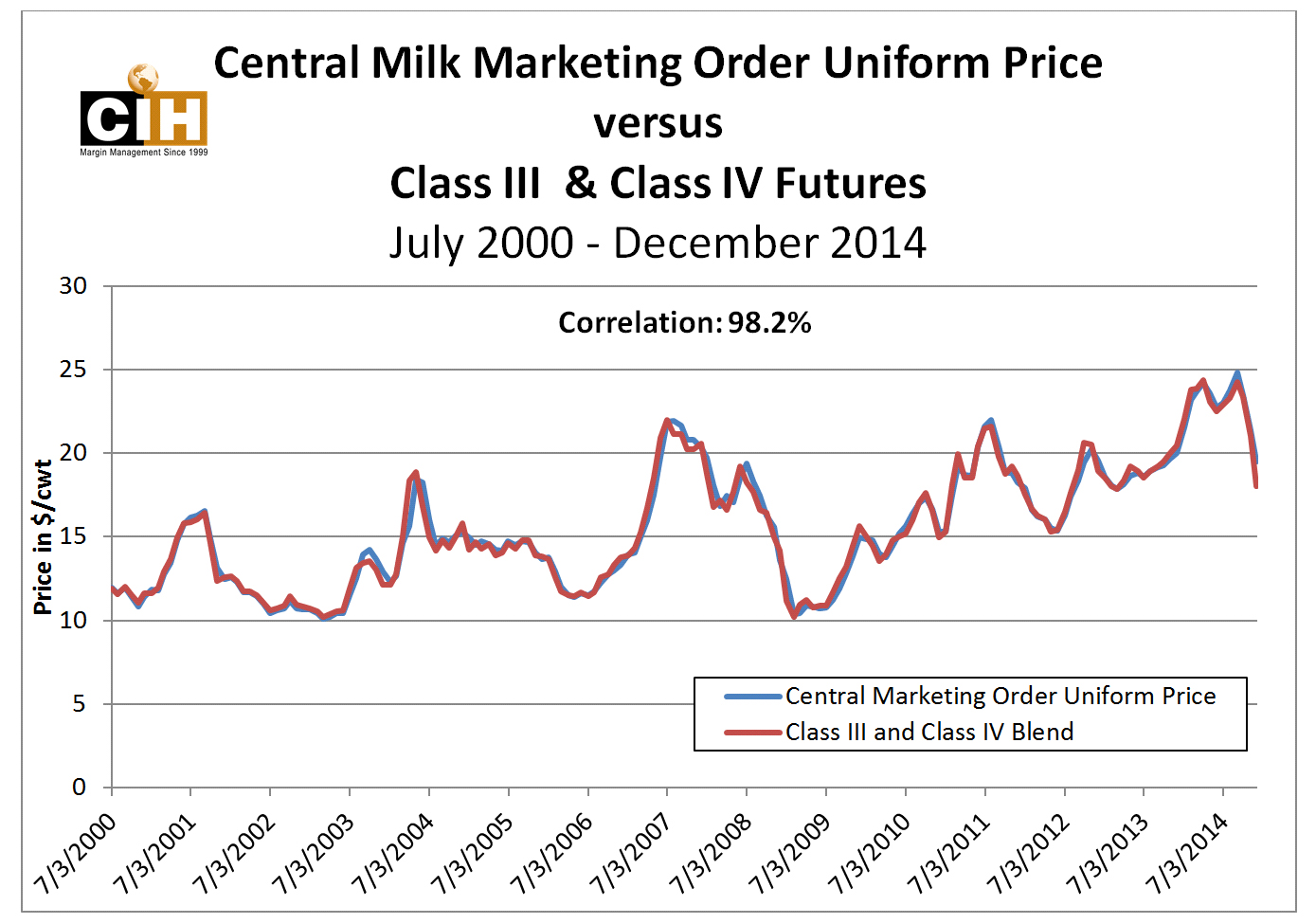 The benefit of this is that by combining both contracts to improve the correlation between cash and futures (the historical variance between the uniform blend price and the milk futures price), much of the monthly fluctuations in PPD can be addressed and a more accurate hedge created to protect the value of a producer’s milk in a forward time period. By only using the Class III contract to hedge milk, PPD will always be a risk factor to deal with and this risk will be greater for producers who sell their milk in marketing orders where the Class III utilization is lower. To learn more about how your uniform blend price has historically varied between Class III and Class IV futures, please contact us to conduct a more detailed analysis.