In discussing margin management and proactively hedging forward opportunities, some questions that get asked a lot are:  “is there really any long-term advantage to doing this” and “wouldn’t I be better off doing nothing at all?”  Perhaps some of this stems from concern that hedges may lose money, result in margin calls, and the effort and capital necessary to devote to the process just isn’t worth it in the long run.  Moreover, there are many stories out there about bad experiences using the futures market and this likely scares people into thinking they are actually taking on more risk to their operation by trying to hedge forward margins.  While an introduction to hedging with the futures market and an overview of proper hedging mechanics are probably best left for a different article, the main question is pretty straightforward to address.

Below are 2 sets of graphs showing profit margins for both the dairy and hog industries.  Each of them is looking at a rolling average of 4 calendar quarters worth of profit margins at a given time within a long-term historical context.  Given that we are currently in Q2 of 2014, the last observation would be averaging the profit margin in spot Q2 with the margins of Q3, Q4, and 2015 Q1.  This allows us to see where a group of margins average out looking forward a year in time at any given point, and compare that value against a long-term historical average.  Two things should be immediately clear when analyzing the graphs.  First, current values for both dairy and hog margins are well above the long-term historical average when considering the opportunity looking out over the next year.  Second, with the exception of only a few years within this history, the 4-quarter rolling margin was above the long-term average at some point in almost every year. 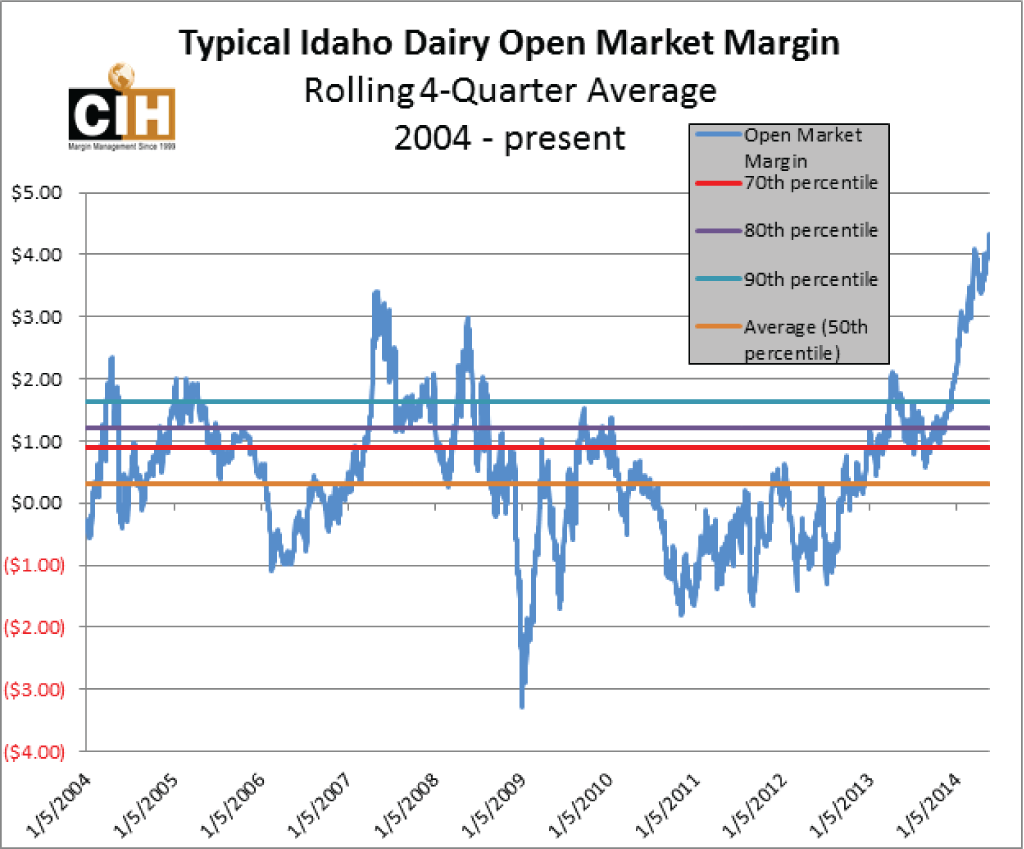 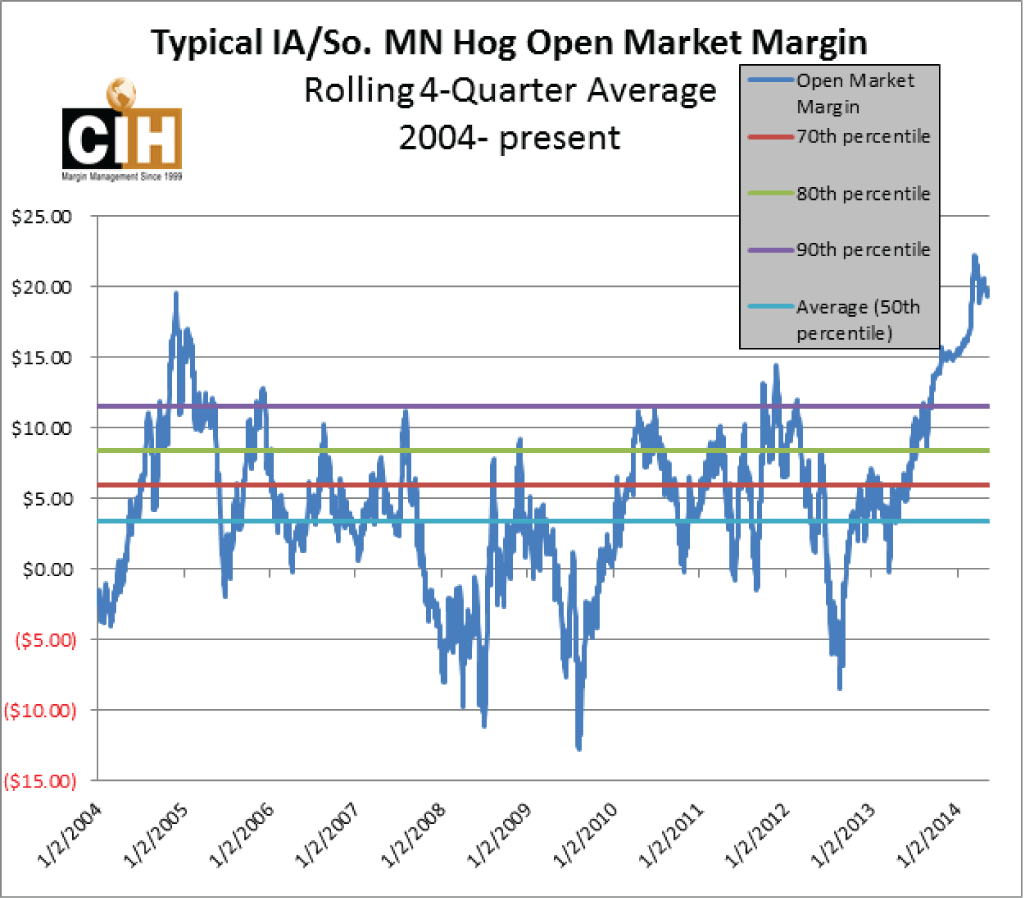 Getting back to the original question, what if you actually did nothing over time?  If I am either a hog or a dairy producer, this essentially means buying my feed on a hand-to-mouth basis as I need it and getting a milk or kill check from my co-op or packer regularly as I ship product in the cash market.  In doing so, I basically will realize an average margin over a long-term time horizon.  There will be periods such as the current year where I will make a lot of money, but there will also be times such as in 2009 when I will be losing a great deal of money.  I will ultimately catch every high as well as every low, and thus achieve an average return over the long run.  Many producers can likely identify with this and are familiar with the ebbs and flows of profitability in these cyclical industries.  Some might even be wise in realizing they should save and build equity from the strong returns they are currently realizing to help cushion the eventual drawdown they will endure when the cycle turns the other way.

In addition to the average margin on each of the graphs, you will notice that there are a few other lines drawn in as well.  These depict the 70th, 80th, and 90th percentiles of where those profit margins have been over that range of history.  While there are only a few years within the history in which dairy or hog margins reached or exceeded the 90th percentile of profitability, the occurrences of margins above the 80th and especially above the 70th percentiles are much more common.  As an example, hog margins attained the 70th percentile in 9 out of the past 10 years while dairy margins achieved this benchmark in 8 out of the past 10 years.  If I am trying to achieve better results than doing nothing and doing nothing means receiving an average margin over a long-term time horizon, it doesn’t appear very difficult based on looking at these charts to beat an average return over a long period of time.

While in any given year (such as the current one) I might be better off staying open to the market, my results will average out over a long period of time.  Just as you wouldn’t judge a ball player or sports team based upon a single game or series but rather over an entire season, the same thing holds true with judging the merits of hedging and proactive margin management.  While it may be true that in the current year a hog or dairy producer can argue they would have been better off doing nothing, it may be more difficult to make this claim when considering that strategy over a longer time horizon.  A question one might ask at this juncture is how can I manage margins successfully so that I would in fact be better off than doing nothing?  This is where a carefully crafted plan comes into play.

Knowing that forward margins typically achieve above-average historical percentiles in almost every single year, implementing a plan that spells out how to capture those margins when they are achieved can put you in an advantageous position to be better than average.  While hedging a 70th, 80th or 90th percentile historical margin is of course no guarantee that the margin won’t continue to strengthen, it does help assure you won’t sustain extreme financial hardship should margins subsequently drop to very unprofitable levels.  Just as a batter is much more likely to reach base by only swinging at pitches in the strike zone, by implementing hedges when returns are historically attractive, a producer is much more likely to achieve stable, attractive returns over the long run.  Because some years may be more challenging, a plan should also spell out contingencies for potentially protecting breakeven levels should margins never achieve targets in which hedges would be implemented.  This can help protect against losses that could be more significant without protection in place.

In the end, if doing nothing means achieving an average return over the long run, a good question to ask may be “do I strive to be average?”  Most producers look to excel in their production practices, incorporating improvements in technology, genetics and other factors to constantly improve upon what they are doing.  Should their approach to managing the risk associated with forward profit margins be any different?